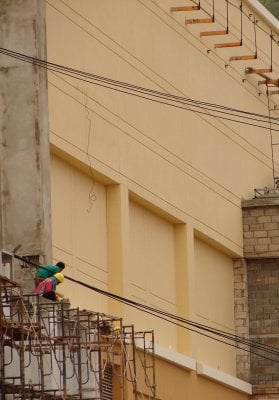 PATONG: After a lull of five months, construction of the huge Jungceylon mall project in Patong is once more underway, with the mall’s new owners saying that much of it will be open for business in November or December.

Suchad Chiaranussati, Managing Director of Recap, which in February bought 95% of Phuket Square, which in turn owns Jungceylon, said that the reason for the delay in restarting was simple: after a year of no activity, Jungceylon had no staff. The main contractor, Powerline, had no people on site. It took time to reassemble all the people needed and to adjust plans.

Now, he said, some 300 to 400 people are on site, mostly working indoors, which is why the site still appears quiet from the street.

Firm commitments to take space in Jungceylon have now topped 85%, K. Suchad said, and the project is on track for the retail side to open for business in November or December this year.

There were originally to have been two hotels in the mall – a new Burasari and a Four Points by Starwood. Both pulled out when the project halted.

K. Suchad said, “We’ll take the hotels back and probably turn them into one property, which should open in the middle of next year.”

One major tenant will be French supermarket chain Carrefour. Puntharee Na Lumphun, Carrefour’s Assistant Public Relations Manager, said that work inside the store is about 70% complete. Decoration will begin at the end of July.

“We halted construction to wait for Recap. We’re not sure yet exactly when the supermarket will open, but it should be around the end of November,” she said.

She noted that Carrefour will need some 300 employees and is planning to hold recruitment days at Phuket Rajabhat University on August 4 and 5, in conjunction with the Provincial Labour Office.

Thawatchai Jirawattanaangkana, Project Manager of main contractor Power Line Engineering – which suspended work on the site more than a year ago when payments dried up – said that the company put workers back on the site “a few weeks ago” and plans to complete construction work in September to give tenants time to decorate their units in time for a November or December opening.

“The new partner [Recap] is paying us regularly and we have not needed to renegotiate the contract with Phuket Square,” he added.