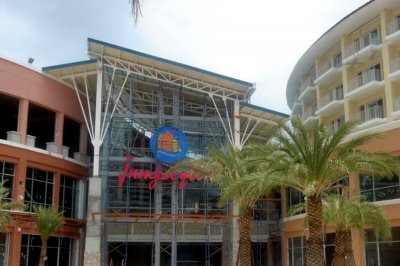 Today, K. Prawit confirmed that work on the project was nearly complete and that the project would open for business on December 1.

Following the buyout, the cost of which he put at 5 billion baht, all available retail space has been reserved, he said.

One high-profile tenant, French hypermarket Carrefour, would open on October 15, he said.

With so many businesses preparing to open at one time, Jungceylon and its tenants needed to launch a publicity complain to find enough employees, he said.

Gov Udomsak told K. Prawit that he hoped Jungceylon would be a success, and raise the profile of Phuket and Patong among foreign tourists.

However, he expressed concern that Jungceylon’s key location, on 55 rai in the heart of Patong, might draw business away from existing businesses, causing hardship and resentment.

K. Prawit said Jungceylon is planning an October 9 press conference at the site to introduce the project to the public.