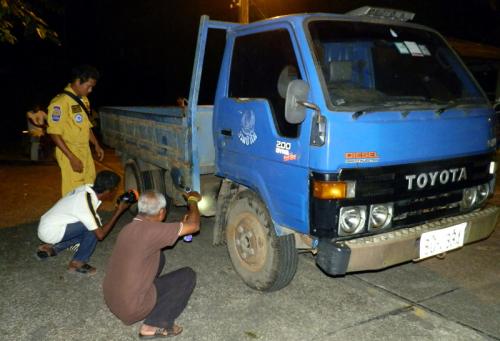 PHUKET: A three-meter King Cobra was captured in Phuket’s Khao Phra Thaeo Wildlife Sanctuary last night after it went along for a ride in one of the park trucks.

The driver of the truck, park employee Wad Promya, 59, had taken the truck to run an errand at a friend’s house. He felt something moving under his seat, but it stopped after a while, so he kept driving.

“A short time later, I saw a King Cobra on the seat next to me. I was scared to death and I jumped out of the truck as soon as I could pull over.

“Then I called the rescue foundation for help,” he said.

Kusoldharm Foundation rescue staff received his call at 5:45pm and arrived at the scene to find Mr Wad and about 10 villagers standing at a respectful distance from the truck.

“We found the snake entwined around the machinery under the truck. It was an old truck and the snake was able to go in and out of the cab easily,” one of the rescue workers said.

Using a long piece of bamboo with a string at the end, the group spent more than two hours maneuvering the snake out.

“We finally caught it at 8:30pm. It was about three meters long and weighed about four kilograms,” the rescue staff worker said.

“The villagers who gathered at the scene were all happy that we caught the snake. They were clapping their hands for us,” he said.

The cobra was put in a bag in order to be transported to a forest and set free.

Mr Wad had just one request. “I asked them to let it go somewhere else, not near Ton Sai Waterfall as it might come back,” he said.