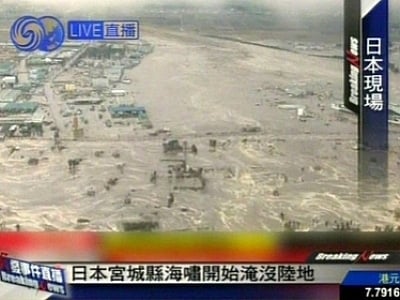 The 8.8-magnitude earthquake at 2:46pm local time (0546 GMT, 12:46 Phuket time) was centered about 179 kilometers east of Sendai in Japan. It struck about 10 kilometers deep, making it a shallow earthquake, according to the United States Geological Survey (USGS).

The Japan Meteorological Agency (JMA) immediately issued a tsunami warning, saying a tsunami as high as 10 meters could strike coastlines. Several major aftershocks also struck, although the magnitudes were not immediately clear.

Japanese television showed large tsunamis strike the port of Kamaishi in northeastern Japan, submerging roads and swallowing up scores of cars. NHK showed footage of fires in Tokyo, hundreds of miles from the earthquake epicenter. It said several buildings had collapsed in northeastern Japan and there were reports of casualties.