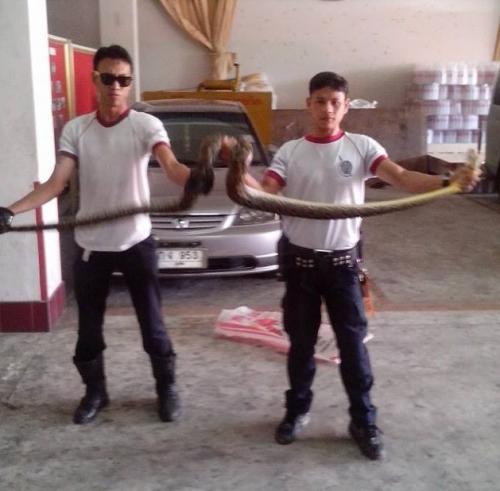 PHUKET: Recent heavy rainfall has led to a jump in large snakes being nabbed in Phuket, with four rounded up in Phuket Town in the last 24 hours.

One of the four giant snakes, a three-meter python, made a dramatic entry into a Phuket Town bedroom by tumbling through a vent.

“I heard noise that sounded like something had fallen off my roof into my bedroom. I got up and went to take a look – it was a huge python,” the resident, Somporn Kankanok, told the Phuket Gazette.

“The snake was about three-meters long, and moved to the bathroom when we arrived,” said a rescue worker. “We quickly captured it and released it later at an undisclosed jungle location.”

Mr Somporn believes that the snake was washed into the Bang Yai Canal near his home by the recent rain and was seeking shelter.

“Most of them have been longer than three meters,” he said.

In memory of “Mrs Palmer of the Phuket Hash House Harriers’