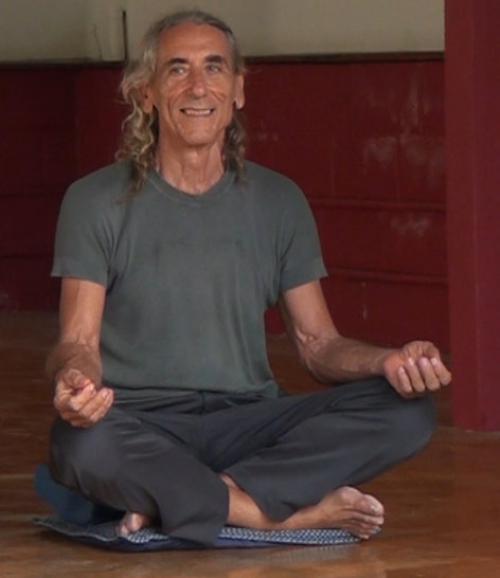 Well-known local healer and Phuket triathlete Richard Patrick Cracknell, 66, passed away in Hawaii in the care of his son Jesse on October 24. He succumbed to complications arising from an idiopathic degenerative motor neuron disease (MND).

PHUKET: This singular American athlete and healer, known by the Phuket Hash House Harriers (Phuket HHH) as Mrs Palmer, arrived in Phuket in the early 90s. He quickly started cracking backs, banging guitar strings, surfing and running in the rubber groves with the Hash.

He quickly set up a makeshift outpatient office, created the extraordinary one-man-band “Mrs Palmer and the psychedelics”, created the Phuket surf scene and was our resident mature-aged tri-athlete champion.

The first chiropractor naturopath to establish himself on the island, Richard was a true health and fitness nut. A raw food aficionado and natural remedy healer, he established “The Wellness House” and “Living Food Café” in Nai Harn, cracking backs upstairs while creating raw organic vegetarian concoctions downstairs. Dr Cracknell retained a dedicated returning client base throughout the region.

Blessed with excellent diagnostic skills and healing hands, his unique style of rough magic helped hundreds. Many famous sports stars and celebrities called him up to their Amanpuri villas year after year for treatment. His banged-up old pickup truck was a regular sight on that exclusive headland in Surin during the Christmas chaos.

Richard moved in completely differing socio-economic circles without ever breaking character. An easy-going, long-haired hippie with six-pack abs, he was equally at home mulling with millionaires and movie stars as he was hanging out with seasoned professional athletes, bleached surfers, aging rockers, pimply teenagers, druggies, fatties, and the terminally ill.

He enjoyed sharing his well-researched knowledge of alternative medicine, and regularly gave tutorials on nutrition, health, diet and fitness – especially on his personal passion: triathlon and endurance race coaching and training.

He marched, or should I say swam, biked and ran through life to the beat of his own drummer, finishing on the podium in hundreds of triathlon races all over the world. A regular winner at the Laguna Phuket Triathlon in his age group, Richard never had enough cupboard space to store all his trophies.

Richard will be remembered by many as a kind and generous man, supremely comfortable in his own skin. Although possessing a wonderful comedic core, he didn’t suffer fools gladly and this sometimes made him appear impatient, dismissive and even a tad arrogant – especially on matters regarding health, diet and triathlon racing. However, he always forgave others quickly and laughed off his inability to satisfactorily correct some of his own character defects.

He would say, “We’re all human and, as such, we’re incomplete works in progress – the good with the bad, the yin and the yang all mixed up inside this primitive reptilian-minded meat sack. It’s best we forgive ourselves and others permanently and do it quickly – so we can get on with this joy of living.”