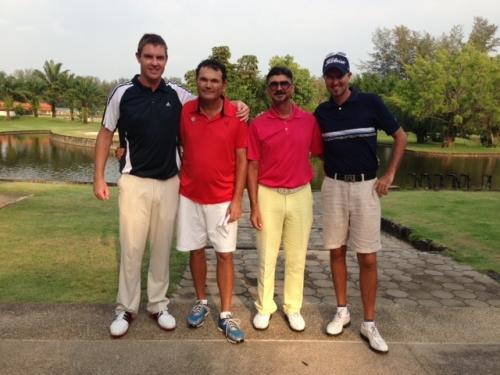 The challenging golfers receive complimentary Titleist caps and the amateur pairing which has defeated the pros by the biggest margin at the end of the year will each win a Titleist golf bag.

Entry fees go towards the Club’s 2013 charity initiative to support the special needs children of Phuket Panyanukul School, with each match raising at least 5,000 baht.

Despite losing the first hole, Paul and Andy raced into a two hole lead as both teams traded several birdies through the first eight holes.

The turning point came when Giovanni made a solid par at the ninth hole, followed by Marco with a par on the 10th and impressive birdies at both the 11th and 13th par three holes.

The pros were unable to counter this impressive play and the match finished with Giovanni and Marco three holes up after the full round.

Victorious Giovanni said: “It was a pleasure to play with such gentlemen as pros Paul and Andy. There is a lovely atmosphere to Laguna Phuket Golf Club and we had a great afternoon of golf.”

Andy, ever gracious in defeat, commented: “We’d like to thank Giovanni and Marco for supporting our charity initiative today – they played some great golf and thoroughly deserved the win.”

Paul and Andy are available every Friday afternoon to accept challenges to “Beat the Pros.” Entry fees are 2,500 baht per club members and 4,500 baht per guest, excluding caddy fee/tip.

For details contact Paul Wilson at paulw@lagunaphuket.com or call 076 324 350.