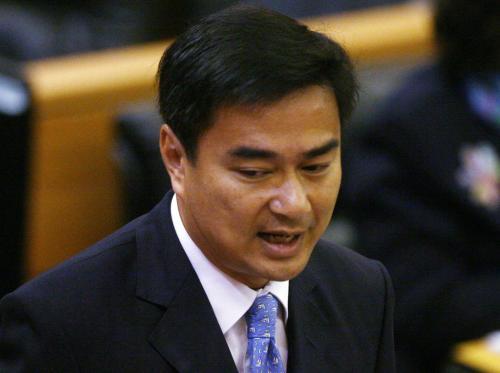 Man jailed for 3 years and 4 months for lese majeste
The Nation / Phuket Gazette
PHUKET: A man who was arrested in March 2011 for selling pirated copies of an Australian documentary critical of the Thai monarchy, as well as WikiLeaks papers, was sentenced to three years and four months in jail yesterday for violating the lese majeste law.

The Criminal Court found Ekachai Hongkangwan guilty of violating the Constitution’s Article 8, which stipulates that the monarchy must be held in reverence. The judges said the content of the documentary produced by the Australian Broadcasting Corporation (ABC) defamed the Crown Prince, his consort and the monarchy in general.

WikiLeaks papers, which were found inside Ekachai’s satchel when he was arrested, contained text defamatory to Her Majesty, the court said. The court said Ekachai should consider “the feelings of [Thai] people” who revere the monarchy and that his intention to “make people believe in this information caused damage to the monarchy’s reputation”.

The original sentence was five years, but as the defendant admitted to owning and selling the material, judges decided to cut it to three years and four months. He was also fined 66,666 baht for selling videos without permit.

The 37-year-old was visibly disappointed and said he would appeal the verdict, insisting that both the documentary and the WikiLeaks papers were only a simple criticism, not slander. He was waiting for the result of his bail request at press time.

Nine of 15 delegate members attend Southern peace dialogue
The Nation / Phuket Gazette
PHUKET: Only nine of the original 15 members of the Thai delegation turned up in Malaysia for a peace dialogue with insurgents’ representatives yesterday. The dialogue is taking place at a police facility in Kuala Lumpur.

The delegation of the Barisan Revolusi Nasional Coordinate (BRN), representing the insurgents, had also shrunk to just five, including Hassan Taib, chief of the BRN liaison office in Malaysia.

Details of the discussion were kept confidential, pending a statement from both sides.

The nine Thais included National Security Council secretary-general Paradorn Pattanathabutr and South Border Provinces Administrative Centre director Tawee Sondsong, as well as former members of the police, the Army and civilians. No explanations were given as to why the team had shrunk.

After arriving on Wednesday, the delegates held a meeting to work out what issues would be on the agenda. Paradorn said a late change in conditions for the number of attendees meant each side would include the same number of people at the talks, but did not say yesterday how many were present.

Army chief General Prayuth Chan-ocha yesterday responded to reports that insurgents had demanded the withdrawal of troops from the far South as a precondition for ending their armed struggle, saying such a move was possible. Paradorn has since denied that any such precondition was ever proposed, while Deputy Prime Minister Chalerm Yoobamrunghas blamed the media.

Prayuth said a bomb attack yesterday in Narathiwat, which killed three soldiers, was not connected to the peace dialogue. The next round of talks will take place in Indonesia next month, a source said.

PHUKET: The opposition yesterday agreed that the country needs massive infrastructure investment but found fault with the government’s plan to seek a Bt2-trillion project loan through issuing a special decree and bypassing the annual budget, which could lead to lax fiscal discipline and ballooning public debt.

During the House-Senate debate on the bill authorising the Finance Ministry to arrange the loan, opposition leader Abhisit Vejjajiva said the government has no need at all to ask for Bt2 trillion from the financial market, the biggest borrowing in Thailand’s history, because it could rely on the annual budget or run additional budget deficits. That would be enough to finance the projects without pushing public debt up to the ceiling as a percentage of gross domestic product (GDP), said the Democrat Party leader.

While the government estimates the total financing cost at Bt5 trillion – Bt2 trillion in principal and Bt3 trillion in interest – this assumes that interest rates will remain low throughout the 50-year repayment period. That is rather doubtful given the global economic uncertainty. The resulting rise in public debt per GDP, which is currently at 45 per cent, was a major concern, he added.

Finance Minister Kittiratt Na-Ranong said the borrowing would not upset the fiscal balance. While it will take time to completely pay off the debt, what the country will get in return is infrastructure assets, which will serve the country for decades.

The government could accelerate debt repayment by just paying more principal back to reduce the interest burden.

Most of the funds will come from the local market, so the income from interest payments will end up in the pockets of the Thai people.

To ensure spending transparency, the projects proposed by state agencies will be scrutinised by the Finance Ministry, NESDB and Budget Bureau, he added.

Kittiratt said the government wants to maintain its goal of achieving a drop in the budget deficit until it achieves a balance.

Abhisit said the government could also employ existing mechanisms such as the public-private joint venture law to encourage private sector investment to support the projects. Then the government might not need to seek such a huge loan.

Transport Minister Chatchart Sithiphan said the government should be the main investor while the private sector would be encouraged to take part in some projects on a case-by-case basis.

These projects are not aimed at generating revenue, but rather at developing the economy and cutting the country’s logistics costs. If the private sector played a role, they might charge high fees or fares for people to use the infrastructure, he said.

Kittiratt said the country needs to build up its resources to boost the economy, promote connectivity within the country and with neighbours and enhance the country’s competitiveness. The borrowing will also ensure the continuity of project development to completion.

Abhisit said the government should not just spend profusely on upgrading infrastructure and ignore spending to improve other not less important areas such as education and healthcare.

MP Boonjong Wongtrairat, from the opposition Bhum Jai Thai Party, said at yesterday’s House debate that the Finance Ministry did not have any clear plans about how it would repay the huge public debt, adding that there would probably be a tax hike.

Boonjong said he was also not convinced that the transport minister would be able to manage the projects successfully, judging from the fact that its State Railway of Thailand was making big losses.