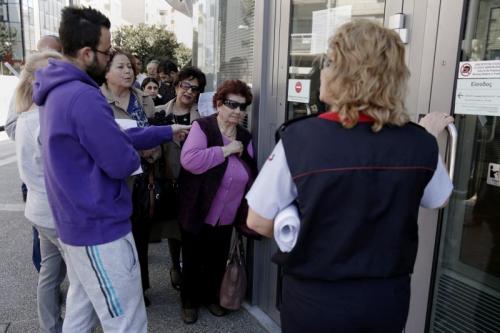 PHUKET: Cypriots queued calmly at banks as they reopened yesterday under tight controls imposed on transactions to prevent a run on deposits after the government was forced to accept a stringent EU rescue package to avert bankruptcy.

Banks were shut almost two weeks ago as the government negotiated a 10 billion euro international bailout, the first in Europe’s single currency zone to impose losses on bank depositors.

Bank staff turned up for work early in Nicosia as cash was delivered by armoured trucks, and queues of at least a dozen people formed at some branches in the capital. Doors opened at noon.

Authorities say the emergency rules imposed to limit withdrawals and prevent a bank run will be temporary, initially for seven days, but economists say they will be difficult to lift as long as the economy is in crisis.

The capital controls decree was taped to the windows of bank branches and staff handed out copies to customers. In Nicosia, there was relief, but some apprehension about what might happen.

“You’ve no idea how much I’ve been waiting for this,” said 64-year-old pensioner Froso Kokikou, waiting in line at a branch of Cyprus Popular Bank, also known as Laiki.

“I feel a sense of fear and disappointment having to queue up like this; it feels like a Third World country, but what can you do?” Kokikou said. “This is what they imposed on us and we have to live with it.”

Kostas Nikolaou, a 60-year-old pensioner, said the uncertainty of the past two weeks had been “like a slow death”.

He added: “How can they tell you that you can’t access your own money in the bank? It’s our money, we are entitled to it.”

Container trucks loaded with cash pulled up inside the compound of the central bank in the capital Nicosia on Wednesday night to prepare for the reopening, a central bank source said. A helicopter hovered overhead, and police with rifles were stationed around the compound.

As in all countries that use the euro, Cyprus’s central bank supplies cash for its banks from the European Central Bank in Frankfurt. Officials have promised that enough funds will be on hand to meet demand. The ECB did not comment on reports it had sent extra cash to the island.

A Finance Ministry decree limited cash withdrawals to no more than 300 euros per day and banned the cashing of cheques.

With just 860,000 people, Cyprus has about 68 billion euros in its banks – a vastly outsized financial system that attracted deposits from foreigners, especially Russians, as an offshore haven but foundered after investments in neighbouring Greece went sour.

The European Union and International Monetary Fund concluded that Cyprus could not afford a rescue unless it imposed losses on depositors, seen as anathema in previous euro zone bailouts.

Cyprus’s financial difficulties have sent tremors through the already fragile single European currency. The imposition of capital controls has led economists to warn that a second-class “Cyprus euro” could emerge, with funds trapped on the island less valuable than euros that can be freely spent abroad.

Reflecting fears of a spillover from the Cypriot crisis, ratings agency Moody’s said it kept euro zone strugglers Ireland and Portugal on negative outlook, citing the Cyprus bailout as an extra risk.

The European Commission said the capital controls were legal and justified under EU law provided they were strictly temporary and proportionate. The EU executive said it would monitor “the need to extend the validity of or revise the measures”.

Many experts are sceptical. In a Reuters poll of economists this week 30 out of 46 said the controls would last months, while 13 expected they would endure a matter of weeks. Three said they could last years.

“These are permanent controls until the economy recovers.”

The bailout, agreed in Brussels on Monday, looks set to push Cyprus deeper into an economic slump, shrink the banking sector and cost thousands of jobs.

Cyprus Popular Bank will be closed and its guaranteed deposits of up to 100,000 euros transferred to the biggest bank, Bank of Cyprus.

Deposits of more than 100,000 euros at both banks, too big to enjoy a state guarantee, will be frozen, and some of those funds will be exchanged for shares issued by the banks to recapitalise them.

While big depositors will lose money, the authorities say deposits up to 100,000 euros will be protected. The Cypriot parliament had vetoed an earlier plan, approved by euro zone finance ministers, that would also have hit small depositors.

European leaders said the bailout deal averted a chaotic national bankruptcy that might have forced Cyprus out of the euro. Many Cypriots say the deal was foisted upon them by partners in the 17-nation euro zone, notably EU paymaster Germany, and some have taken to the streets to vent their frustration.

PHUKET: Portugal’s premier Pedro Passos Coelho has told his closest colleagues his government may fall if the country’s constitutional court rejects some of his austerity measures, Publico newspaper reported yesterday.

Such a collapse, or a major failure in meeting budget targets, could derail Portugal’s exit from its European Union bailout programme and add another layer to the euro zone crisis, currently focused on Cyprus.

A government spokesman would not comment on the report.

The newspaper said the prime minister had told the permanent commission of his Social Democratic Party the government was unlikely to be able to find alternative measures to compensate, for an unfavourable ruling from the court.

The court, expected to rule in the next few weeks, has been analysing this year’s budget, which includes the largest tax hikes in living memory. Various opposition parties have argued that cuts to pensions, civil servants’ salaries and welfare benefits undermine workers’ basic rights.

Asked about the impending decision on Wednesday, Passos Coelho declined to predict the outcome, but told reporters “the court has to take responsibility for its decisions and for the impact they may have on the country”.