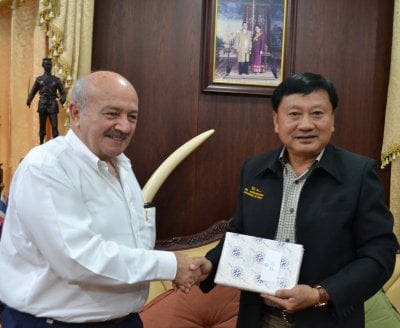 PHUKET: The Israeli ambassador to Thailand was in Phuket yesterday and met Governor Tri Augkaradacha to offer assistance in airport security and water technology.

Ambassador Itzhak Shoham told the governor that he would, on behalf of Israeli investors, like to offer support and knowledge of security systems to Airports of Thailand in their expansion of Phuket International Airport.

Amb Shoham added that security at Suvarabhumi Airport in Bangkok is based on the Israeli model and that Ben Gurion International Airport in Tel Aviv is the most secure airport in the world.

“As you know, the situation in Israel is quite dangerous, so we need the most efficient security systems to protect the country,” Amb Shoham said.

“We develop technology along with human resources.”

He said that the growing population of Phuket may lead to water shortages in the future and that Israel, as a leader in desalination technology, is ready to provide assistance.

Gov Tri said that he was very much interested in the invitation and that he, with airport officers, would like to schedule a visit to Ben Gurion Airport to observe the security systems there before the expansion of Phuket Airport is complete.

Amb Shoham has served as the Israeli Ambassador to Thailand since January of last year.