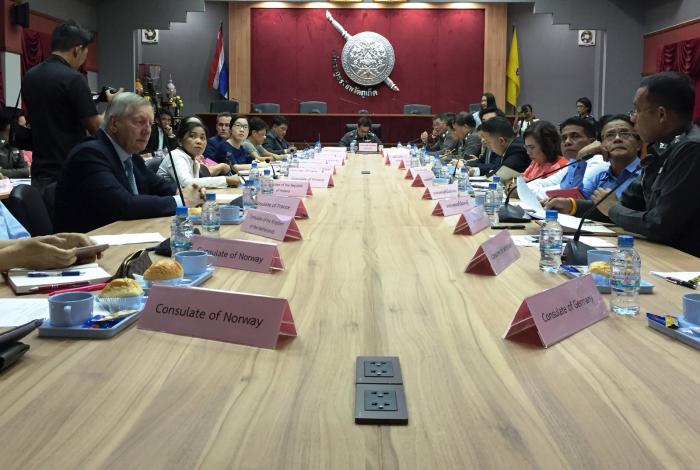 PHUKET: The Royal Thai Police announced yesterday morning that new safety measures will be taken by Provincial Police to boost tourist “confidence” in light of the August 12 bombings.

At a meeting of local officials and consular representatives, the police responded positively to the requests of 15 consuls to assign officers to a contact and information center in case of emergency situations on the island.

“We would like to announce four safety measures,” said Phuket Provincial Police Commander Teerapol Thipjaroen. “Firstly, we plan to get updated news and information on crime related to tourists for analysis so we can be on top of things at all times. Secondly, we have come up with a prevention plan under which we will have more officers patrolling tourist areas in cars, motorbikes, bicycles, ATVs and also on foot.”

“Next, we will ask for local businesses, such as hotel operators, to cooperate with us by ‘keeping an eye’ on their areas. Lastly, we will use Information Technology (IT) to boost security. We will be importing security systems, such as POLIS, CRIMES, PDC, I-POLICE, CCOC and Home-Guard as soon as possible.

“We really need information to to report to our embassy but have no one to ask,” said Pornphan Sittichaivijit, the Royal Norwegian honorary consul to Phuket. “We need facts and not rumors, and it would be great to have a contact center that we can call and ask. The other option is to have officers call and inform us during emergency situations.”

In response, Gen Teerapool agreed with the suggestion and said that he will work with relevant officers to get the center set up as soon as possible, and that the consuls could “call in directly in case no one else gets in contact.”

Consular representatives from Australia, China, Norway, Finland, Estonia, Germany, the Republic of Korea, the Netherlands, Austria, the Czech Republic, Switzerland, France, the UK and the US were present at the meeting.