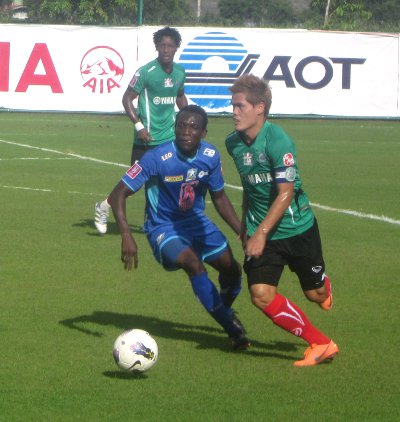 PHUKET: The Islanders, reduced to 10 men following the dismissal of defender Wuttipong Sittitanyakit, conceded two back-to-back goals in the final minutes of a 3-0 away loss on Saturday evening against Airforce United.

The late afternoon match, both sides’ 26th fixture of the season, was played under clear blue skies at North Bangkok University’s Rangsit campus stadium in Rangsit, just north of the Thai capital.

The official turnout of 531 included dozens of diehards who had made the trek from Phuket.

Although Phuket enjoyed decent possession with a number of set-play opportunities to level the score, it was the home side who enjoyed more convincing chances on goal.

Herman would have doubled the lead midway through the first half, but to the dismay of home fans his effort was disallowed at the final moment with an off-side flag being waved.

Phuket’s defense and midfield were kept under constant pressure, working hard to repel sustained Airforce attacks to keep the scoreline 1-0 through to halftime and much of the rest of the match.

All of the Islander’s efforts to find an equalizer were effectively blocked by a solid Airforce defense, commanded smoothly by Thai league all-star goalkeeper and American national, Gorrick Devela.

Phuket defender Wuttipong Sittitanyakit was sent off after collecting his second yellow card for bringing down Hermann in the penalty box on a breakaway attack in the final minutes of the game.

The subsequent penalty kick did not miss its mark, with the Ivorian recording his 12th of the season.

A few minutes later, in the second minute of added time, Airforce sealed the match with a final goal, this time by their second leading scorer, Nigerian national, Ononiwu Chukwuma, who scored his 9th of the season after outrunning a stretched Phuket back line.

Other results are as follows:

Phuket’s next match will be a tense southern rivalry match against 13th placed Phatthalung FC, who are only one point behind Phuket in the tables.

Like Phuket, Phatthalung will be striving for points in Sunday’s game to escape this year’s relegation pot of five teams. With only eight fixtures remaining, stakes are high.

Kickoff at Surakul Stadium is scheduled for 6.30pm.