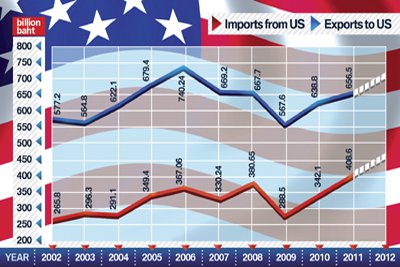 PHUKET: More than 700 American companies will have a combined investment of US$40 billion – approximately 1.25 trillion baht – in Thailand by the end of 2012, a business leader recently told the Thai government.

The president of the American Chamber of Commerce (AMCHAM), Joe Mannix revealed the figure in a speech given at a thank-you function for the government, hosted by AMCHAM in Bangkok.

Mr Mannix praised the Yingluck administration’s efforts to push the 2012 GDP to a projected 5% growth, which is equal to the anticipated growth for the greater Southeast Asia region.

Thailand has shown strong commitment and potential for continued investments given its strong emergence economically, despite last year’s massive floods, he said.

Mr Mannix went on to describe Thailand’s ambition to manufacture two million vehicles as “historical,” while also lauding the Thai government’s projection for the number of foreign tourists to the Kingdom to exceed 20 million arrivals this year.

He said that American companies regard Thailand as one of the top countries for investment thanks to its economic revival, adding that a survey by AMCHAM found that 65% of US companies have plans to expand their investments in Thailand.

The president noted that US companies, however, doubted if ASEAN will achieve its goal to integrate into one single economic community (AEC) in 2015.

“We do hope that Thailand will be conducive for ASEAN to achieve the goal,” he said.

Stressing the government’s anti-corruption policy, the premier said the government will promote transparency in its administration for the benefit of foreign investors in Thailand.
She expressed hope that strong Thai-US relations will give economic benefits by elevating the US to become the Kingdom’s top trading partner.

The US is currently Thailand’s third largest export market behind China and Japan.

Last year, Thai exports to the USA were worth 656mn baht, compared to China-bound exports worth 791mn baht, exports to Japan valued at 719mn baht.

In the first seven months of this year, Thai exports to the US were worth 410mn baht, with exports to China and Japan worth 484mn baht and 422mn baht, respectively.

As for import markets, the USA is the fourth largest supplier to the Kingdom, behind Japan, China and the UAE.

In the first seven months of this year, American exports to Thailand were valued at 238mn baht, a slight improvement from the same period last year when the exports were worth 235mn baht.