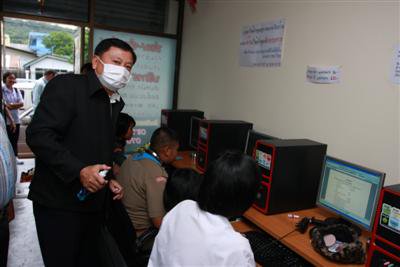 PHUKET CITY: The government-ordered closure of internet shops and tutorial schools nationwide to stop the spread of swine flu is not being enforced in Phuket, public health officials admit.

Most of the 480 registered internet shops on the island simply ignored the order, which they view as unfair and illegal.

Cabinet last Thursday approved a proposal by the Ministry of Public Health to close all internet shops and tutorial schools nationwide from July 13 to 26 to halt the spread of the A(H1N1) virus that causes swine flu.

However, whether the education or health ministries have the legal authority to enforce such a measure has been called into question.

The swine flu outbreak in Phuket is not as bad as it is in Bangkok, so the PPHO is asking internet shop operators to take extra precautions, such as cleaning keyboards and computer mice after each customer, he said.

Most internet cafes and tutorial schools have taken the necessary precautions to prevent the virus from spreading, Dr Pongsawas said.

As of yesterday, the number of reported cases of A(H1N1) infection in Phuket stood at 111, he said.

About half of the cases, including the only fatality, involved students.

On Thursday evening, a team of provincial officials set off on an inspection tour of karaoke bars, movie cinemas and internet cafes in a bid to warn business operators of the need to keep up the fight against swine flu.

Setting off about 5pm, the team visited internet cafes, then went on to the Coliseum Paradise cinema.

“Phuket has 480 registered internet shops. Most have given good co-operation by providing customers with hand wash gel and surgical masks, and putting up signs informing sick people that they cannot enter. They have to clean the mouse and keyboard after each customer. Some internet cafes are cramped, so we are asking operators to improve ventilation,” V/Gov Tri said.

Meanwhile, the outbreak of the viral disease chikungunya appears to have peaked.

Dr Pongsawas says there has been a total of about 2,500 chikungunya cases reported in Phuket so far, but reports of new cases are now typically at about four or five a day – much lower than the 50 or 60 cases daily when the disease was at its peak, he said.