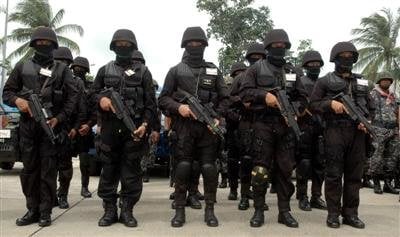 “I want to assure you all that the security arrangements are superb and the meetings will proceed without disruption,” he said.

In April, anti-government protesters stormed into the Asean Summit’s venue in Pattaya, forcing the government to abruptly cancel the event.

While not directly mentioning the April fiasco, he said: “I want to reiterate we have confidence in the smooth proceeding of the ARF [Asean Regional Forum] and AMM [Asean Ministerial Meeting] in the next few days.”

Foreign ministers from the 10 Asean countries convene on Monday to discuss issues that include the formation of an Asean human-rights body.

Later in the week they will meet their counterparts and their representatives from 17 other countries and the European Union for the PMC and ARF.

Among the participants are US Secretary of State Hillary Clinton, who will attend the ARF.

Phuket has been placed under the Internal Security Act since July 10. The law was imposed on the island province in order to avoid the embarrassing mistakes committed in Pattaya.

Vehicles were being randomly searched at checkpoints around the conference venue at the Sheraton Grande Laguna Phuket.

Military officers were present to help the police with security. There was also a presence of military officers inside the meeting-venue compound, which also houses the media center.

Some soldiers carried pistols, but no assault rifles were seen.

Journalists were not intimidated by the security measures.

Thu Ha Vu, a reporter from the Viet Nam News, said she thought the security, while by no means harsh in appearance, was sufficient to keep the meeting safe.

She praised the selection of Phuket, as well as the Laguna complex of hotels, saying it would be difficult for prospective protesters to access the area.

A reporter from Burma said she found the general atmosphere ahead of the meetings “very quiet”.

Security measures were lighter than what she saw in her own country ahead of such an important event, she said.

Phuket Gazette reporters living within the five-kilometer heightened-security area surrounding Laguna Phuket, venue for the conferences, say the atmosphere continues decidedly calm, with “very light traffic” and what many see as a smaller-than-expected uniformed security presence.

“The reality is a far cry from the hype and glitter of some Web reports which have cited huge traffic tailbacks and predicted military tanks rumbling in the streets,” said Walter Marizzi, owner of a restaurant in the Laguna area. “It’s just not happening,” he added.