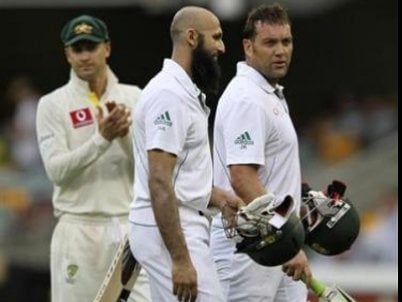 Rain delays start in Australia-South Africa test
Reuters / Phuket Gazette
PHUKET: Heavy rain at the Gabba prevented the second day of the first test between Australia and South Africa from getting underway today.

South Africa had reached 255 for two in their first innings with Hashim Amla (90) and Jacques Kallis (84) closing on centuries when bad light brought an early end to play yesterday.

A torrential downpour some 45 minutes before the scheduled start today was followed by a heavy drizzle and the weather forecast promised much of the same for the rest of the day.

South Africa have been reduced to 10 batsmen for the match after JP Duminy was ruled out for the series after rupturing his Achilles tendon in training on Friday.

Duminy was also expected to play a key role with his offspin after specialist spinner Imran Tahir was dropped from the side to make way for a fourth pace bowler.

South Africa’s number one test ranking is on the line in the series, which continues after Brisbane with tests in Adelaide and Perth.