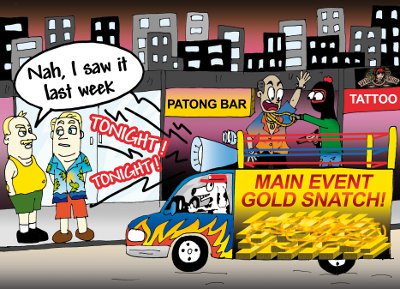 PHUKET: Having an apprehended bank robber give advice on how to keep banks safe from similar armed felons was just one of the interesting developments regarding “financial security” in Phuket this week.

Confessed bank robber Anusit Kaewmookda suggested that each bank branch have a security guard on duty to deter robbers. Despite Mr Anusit’s good intentions with such advice, the Gazette cannot fully support it, unless it is made clear that bank security guards should not be given guns. Though perhaps armed guards have lowered the frequency of bank robberies around the world, they have also caused an escalation in the violence necessary to carry them out – standard Cold War conditioning. When armed guards are present, the robbers are forced to either flee or use lethal force to get the job done.

It is easy to argue that such crimes as bank robberies do not affect Phuket’s essential tourism industry, but they do. Although Phuket’s “wild west” style robberies tend to be in areas far from the tourism enclaves of the island, the criminals and our visitors share the same streets, both before and after the crime.

This crossover means that tourists are drinking in the same bars and riding in the same tuk-tuks as the ilk who carry illegal firearms and are predisposed to use them should they become annoyed. In this neck of the woods, annoyance can arise quickly when someone stares at a stranger, or speaks “impolitely” to an individual.

Gold shop thief “Koson”, who robbed a shop in Rassada in mid-September, deserves at least some kudos for taking a ‘pea-shooter’ to a potential gunfight. He stole the gold with nothing more than an air pistol and an intimidating tone of voice.

Luckily for Koson, that gold was insured, meaning the shop owner had little reason to keep a firearm on the premises – unlike when Lacheman Kumar entered a gold shop in August.

Armed with only a replica gun, Mr Lacheman was shot by the shop owner who, on seeing the thief put his hand into a backpack, felt compelled to protect his stock and blazed away. That gold shop owner had no qualms about opening fire in his shop in Karon, where tourists are found in every nook and cranny, year-round.

With so many criminals in action throughout Phuket, it must be difficult for the Royal Thai Police and the Tourism Authority of Thailand (TAT) to abstain from declaring firearms, bank robbers and ATM rip-off artists as “non-traditional threats” to Thailand’s lucrative tourism machine, but abstain they have.

The only solution outside of cleansing the island of these local and foreign “crime-tourists” might be for the TAT to join forces with the police and promote the highly-publicized crime re-enactments as tourist attractions, charging handsomely for attendance at the spectacles.

This would at least help to offset the unrecognized potential losses to the tourism business, and if marketed properly as a “performing art”, might just make the ‘bucket lists’ of millions of curiosity seekers worldwide.