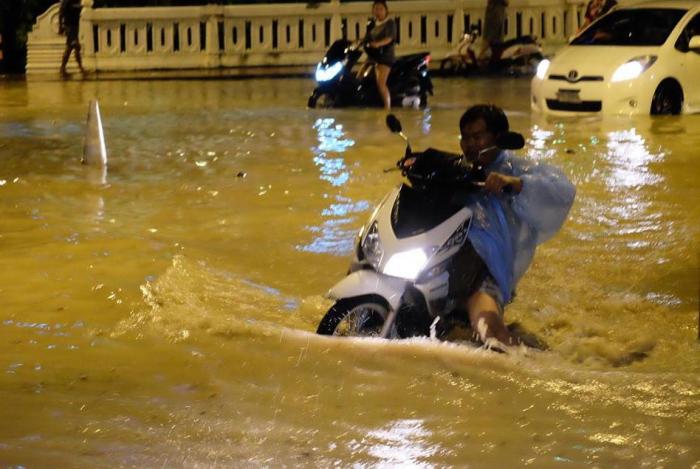 PHUKET: Emergency staff have been ordered to remain alert after continuous rain battered the island last night, lasting well into the morning and flooding large areas in Patong and Phuket Town, among others.

“I have ordered local administrative officials to stand by for any emergencies and also be on the lookout for residents who might need help,” Governor Chokchai Dejamorthan told the Phuket Gazette.

Officials from the Department of Disaster Prevention and Mitigation (DDPM) and other rescue personnel helped drain out rainwater from areas that were affected by flash floods that followed last night’s rains.

“I request the public to be prepared and remain on high alert as well,” Gov Chokchai added. “Emergency staff is present to help out in any adverse situation that might occur due to prevailing storms.”

“We sent out staff to drain water from flooded areas,” said V/Gov Teera. “They have been at it since 2am today. However, we have to come up with a long-term solution in case we get more heavy rains.”

Mayor Somjai added that the water level in the Bang Yai canal was very high.

“We discussed future long-term solutions for draining water from Bang Yai to Saensuk with V/Gov Teera,” she said.

“Large amounts of waste was blocking the river flow, which is why we urge residents to avoid throwing trash into the sea. It may be convenient for you, but it puts residents near the canal in a bad situation.”

At about 4am, Patong officials scrambled to help tourists get to safety by using boats and 4×4 vehicles.

“We ran the water pump early this morning to drain out the flooded water, and as soon as its level decreased we cleaned up all the trash that had washed up,” said Patong Mayor Chalermluck Kebsup.