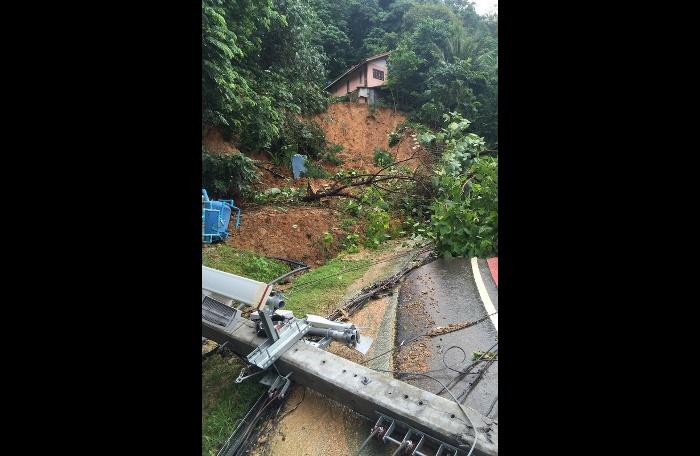 Traffic was choked up on the 50 Pi Road, connecting Chalong and Petchakoot Road to Kata Karon.

Patong Municipality sent workers to pick up the fallen trees while staff from the Provincial Electricity Authority (PEA) office in Patong cleared up the poles.

“There have been no reports of injuries so far,” Sampawat Wannasangkam, an officer from the Patong Municipality Department of Disaster Prevention and Mitigation (DDPM), told the Phuket Gazette this afternoon.

“We are monitoring activities in the area and clearing up the roads so that vehicles can pass. Our staff is also cleaning up dirt and debris that has washed up on the roads.”

Mr Sampawat said that as public roads are the first priority, any residents who have been affected by debris washing up near their houses are requested to start cleaning up on their own rather than waiting for officials to step in.

“Though the water has been drained from Patong, we continue to do our duty and will keep an eye out for any emergencies that may arise, as it is likely to continue raining for some time,” Mr Sampawat added.