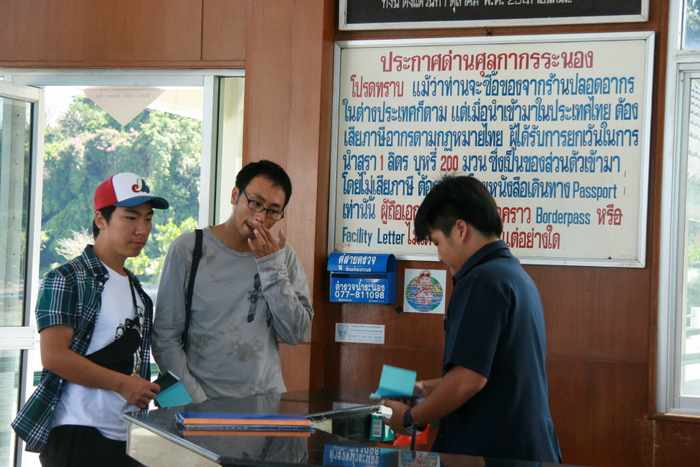 PHUKET: New penalties that will lead to some foreigners caught overstaying their permits-to-stay being blacklisted from re-entering Thailand for life may be introduced before the end of the month.

The news follows reports of a new form, titled “The Acknowledgment of Penalties for Visa Overstay”, being distributed to all immigration checkpoints throughout the country.

The new proposed penalties are listed on the form as follows:

However, the penalties are not yet in effect.

The Immigration Bureau’s Acting Commissioner, Lt Gen Sakda Chuenpakdee, has submitted this proposal to the Ministry of Interior for approval.

“The commencement date has yet to be set, but that will be done as soon as the proposal has been approved. However, it will not take long. It may come into effect this month,” Lt Gen Thatchai Pitaneelaboot, commander of Immigration Bureau’s Region 6 division, confirmed to the Phuket Gazette today.

If introduced, the form is to be signed by all foreigners entering the country. One copy will be kept by immigration officers, and another by the expat or tourist arriving in the Kingdom.

“Some foreigners have been ignoring our laws for a long time,” Gen Thatchai said. “Some even overstay more than 10 years. The maximum penalty for this is only a 20,000-baht fine [and forced deportation].

“It is time to stop. If you live in a country, you respect its rules.”

Gen Thatchai warned that he expected no right of appeal to be granted to foreigners caught committing overstays.

Lt Col Banphot Kittivira, Deputy Superintendent of the Immigration checkpoint at Sadao, on the Malaysian border, confirmed that his office received a copy of the new form.

“Although the form currently states that any foreigners caught overstaying by less than a year will be banned from re-entering the Kingdom for five years, please note that this will only apply to foreigners who overstay by more than 90 days,” he said.

“Any foreigners who overstay less than 90 days will be subjected to the normal 500-baht a day fine.”

Col Banphot, who just two weeks ago had to rein in overzealous officers enforcing cash requirements for foreigners entering the country (story here), confirmed that his office will wait for official approval before enforcing the new rules.

Phuket Immigration has also received a copy of the rules.

“All ports of entry and immigration offices in Thailand have received the new form,” Phuket Immigration chief Sunchai Chokkajaykij confirmed to the Gazette.

“These new rules will be very good. We fully support them. Good people are welcome to travel or work in Thailand, but people who break the law are not. These law-breakers must be punished.”

Col Sunchai explained that at this stage the form is to remain in Thai and English only.

“The Immigration Bureau is not considering adding other languages at the moment.”

Ranong Immigration Superintendent Aekkorn Butsababodin assured that though his office was ready to start enforcing the new rules, the current rules still applied.

The move to enforce sterner penalties for overstays comes ahead of a crackdown on foreigners entering Thailand on visa-exemption status set to launch on August 13 (story here).

The notice explained that US tourists travelling to Thailand are eligible to enter the Kingdom without a visa and stay for 30 days under the Thai visa-exemption policy, but only if they are able to show an onward/return ticket and possess a passport that is valid for at least six months beyond their date of entry into Thailand (story here).

However, the notice also warned, “If immigration officials perceive that individuals are entering Thailand to reside for an extended time or indefinitely, rather than seeking entry for tourism, such individuals may be denied re-entry.

“If so, they will be referred to a Royal Thai Embassy outside of Thailand to apply for a regular Thai visa before seeking to enter Thailand again.

“The US Embassy and Consulate are not able to intervene with Thai Immigration or the airlines regarding their regulations and policies on behalf of a US citizen who is denied re-entry.”

Ruthless Germany stun the world with rout of Brazil