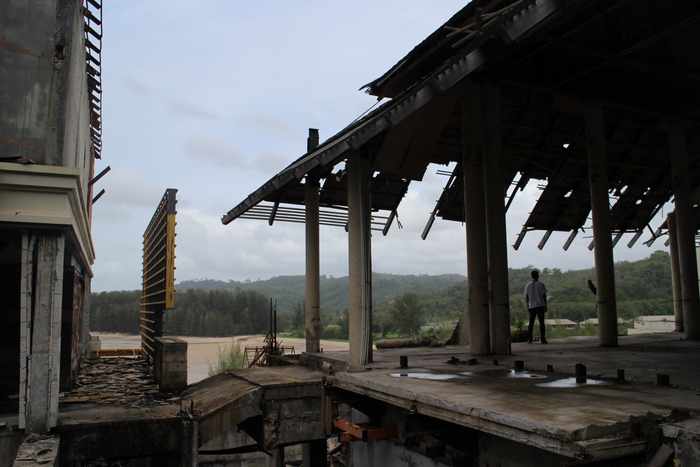 PHUKET: The investigation into land encroachment at Phuket’s Sirinath National Park continued today as officials – including about 30 armed Army personnel – inspected an abandoned resort, with national media in tow.

The property, Phuket Peninsular Spa & Resort, is on the original list of 10 – which has now grown to 14 – that have long been under investigation for encroachment (story here).

“Part of the resort’s Chanote was originally a SorKor 1 for two rai that increased in size to six rai when it was upgraded to a Chanote,” said Department of National Parks, Wildlife and Plant Conservation (DNP) Director Samak Donnapee. “In addition, there is a plot of land close to the beach that may not have a legitimate Chanote title.”

The visit follows a slew of recent advances in the fight against encroachment.

Last Friday, the Director-General of the Department of Special Investigation (DSI) announced that the Land Office would be ordered to hand over records and copies of land titles for plots along the border of – or allegedly in – Sirinath National Park (story here).

Earlier today, Mr Samak announced that on Thursday, a center to verify land legality would be set up. Before making a purchase buyers can confirm, free of charge, that the land they wish to purchase does not encroach on the park (story here).

The presence of the Army today follows Mr Samak’s appeal to the National Council for Peace and Order (NCPO) on June 16 to take over park land encroachment investigations (story here).

“Our work is more comfortable at this stage because the NCPO sent soldiers to participate in the inspection,” Mr Samak said today.

He noted, however, that until the land titles have been fully investigated and proven false, nothing could be done about the Peninsular resort, which is clearly visible from Nai Yang Beach and is in a state of deterioration.

“Nearby residents have been coming in to remove objects they can sell. It’s dangerous to walk around here in the dark, but there’s nothing we can do about it,” Mr Samak said.

“The right of possession rests with the owner until the investigation and any legal action is concluded.

“The owner could even try to sell this land, but we are doing our best to inform people to carefully investigate any real estate they intend to buy by checking with us first.”

Tomorrow, the officers will move to Nai Thon to clear vendors from the beach and issue warnings to vendors occupying public space at Sai Kaew Beach.