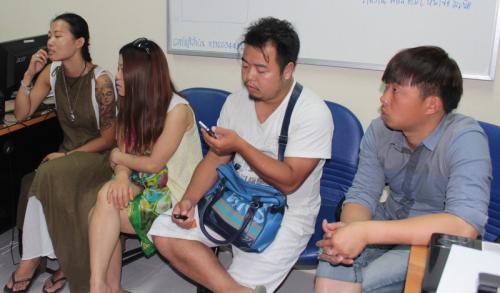 PHUKET: Two photographers, a makeup artist and an owner of a Phuket photography studio were caught working without work permits yesterday after their rude behavior was flagged by local residents.

Phuket Old Town residents filed a complaint to police against Love Island Wedding Studio Co Ltd, which had been using their homes as backdrops for pre-wedding photos without asking permission.

“Locals said that people in the company shouted a lot and were not polite,” said Phuket Immigration Superintendent Sanchai Chokhayaikij.

The company, which specialized in taking pre-wedding photos of Chinese couples at tourist sites around Phuket, charged 20,000 baht per couple, Col Sanchai said.

Police raided the company, located on Maeluan Road in the Rang Hill area, at 11:45am.

Shi Liang, 29, an owner; Tian Zhuang, 21, and Peng Xianrong, 29, photographers; and Deng Lijuan, 26, a makeup artist, were all arrested and charged for working without a work permit.

“We were told that Ms Peng and Ms Deng had just been working there for two days,” Col Sanchai said.

All the suspects face a fine of up to 100,000 baht, five years in jail, or both. They can also be deported within 30 days, Col Sanchai said.