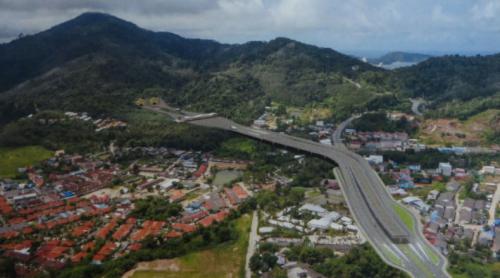 PHUKET: The funds for compensating Phuket landowners who would be displaced by the construction of the Patong Tunnel have more than doubled, jumping from 1 billion baht to 2.56bn baht.

The Chief Inspector-General of the Ministry of Transport, Somchai Chanrod, made the announcement in Phuket earlier this week.

It was not clarified whether the government had expanded the number of families to be compensated or increased the payments for those already on the compensation list.

The government said 20 families would need to be compensated for giving up their land at a public feedback hearing last April. However, local residents said the number was closer to 80.

At a transportation conference held at Phuket International Airport on Tuesday, Mr Somchai explained how the 9.57bn baht budget was to be allocated: 6.80bn for materials, 2.56bn for land expropriation and 200mn baht for salaries.

Mr Somchai acknowledged that local residents had in the past objected to the project, but said he had been told that “they have no problem with the project anymore”.

“They were worried about dust from construction and the risk of landslides. However, when we explained what kind of drilling machine we would be using, they changed their minds. The Diamond Coring machine makes drilling easy and doesn’t raise a lot of dust,” he said.

However, at the public hearing last year, it was environmental issues and the loss of ancestral land that were the main concerns voiced by residents.

“Patong Municipality has studied only how and where to build the tunnel. They have not studied the effect on the environment and local residents,” said Jamras Aiemsaard, a resident of the Baan Mon community, which is located where the tunnel is planned to enter Patong.

In interviews with the Phuket Gazette in January last year, Baan Mon villagers claimed that 90 per cent of local residents were strongly against the tunnel project, as they believed it would require the eviction of nearly 500 people (story here).

At that time, residents had not been told how much they would receive for their land, but some said that regardless of the price offered, they would not leave.

“Even if they give us the Patong price, we still wouldn’t leave because this is our ancestors’ land,” said Thachapol Kamintong, who owns a four-rai rubber plantation on the hill through which the tunnel will run.

Resident Boonlert Winyantikul agreed. “We need to stay in our ancestral home. If our land is expropriated, what will we do next, and where will we go?”

Mr Somchai on Tuesday stressed that the tunnel was needed for safety.

“There are too many accidents on Patong Hill, caused by a variety of reasons: brake failure, the way the road was engineered and lack of experience of drivers,” he said.

“The best way to solve the problem is to build a tunnel.”

However, the Gazette‘s current poll, which asks readers, “What is the best way to prevent further deadly bus accidents on Patong Hill?” does not support Mr Somchai’s conclusion.

The option of “better trained drivers” led the charge, backed by almost 52 per cent of voters. The option “Build the Patong Tunnel” came in a far second, garnering only 19.7 per cent of votes. (To have your say click here.)

Nonetheless, Mr Somchai said the study period for the Patong Tunnel project would end this year, and he anticipated that it would take another year to pass the Environmental Impact Assessment (EIA).

“I expect we will consider the project for the 2017 budget,” he said.

Mr Somchai said his only concern was the possibility of new construction and development in the proposed tunnel area.

“If there is new construction there, we may need to raise the compensation budget,” he said.

He vowed to push the tunnel project through as quickly as he could.