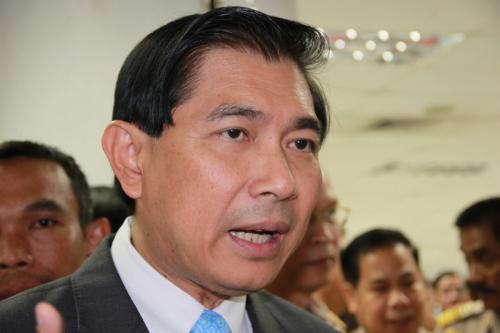 PHUKET: Illegal taxi drivers from Patong today threatened Phuket Governor Maitri Inthusut with mass protests if the government does not do more to help them become legal.

The naked threat was delivered today at a meeting at Phuket Provincial Hall immediately after the Governor’s monthly address to the Phuket media.

“We need help from the governor to find a way to resolve this problem,” said Anan Pluemjit, an illegal taxi driver working from the taxi stand in front of the Hard Rock Cafe in Patong.

“If not, we will return next week with more drivers than were present for the tuk-tuk protest last week,” he said.

“Police are arresting us and making sure we are ‘charged double’. We cannot afford to keep paying these fines,” Mr Anan said.

Police have been arresting and charging illegal taxi drivers for both using a standard vehicle as a taxi and with driving an illegally modified vehicle to serve as a taxi, he explained.

Money is the critical issue, he explained.

“We do not have the money to make our cars meet the qualifications necessary to be legally registered as taxis. Our cars are too old and we cannot afford to sell them and take on new loans to buy new cars,” Mr Anan said.

“Also, we must have first-class insurance for our cars to be registered as taxis… We simply cannot afford it,” he added.

“We have tried to negotiate with the Phuket Land Transport Office to find a way to make us legal, but we were told to wait. How long do we have to wait?” Mr Anan asked.

“I want hardworking people in Phuket to be able to live together in peace. I promise to find a way to help,” he said.

“I have spoken with the PLTO about helping illegal taxi drivers to become legal. Right now, we have about 2,800 illegal taxis in Phuket,” the governor pointed out.

“But those working illegally have to find a way to do the right thing. We have already managed to legalize about 40 per cent of illegal taxis,” he added.

“If financing of new vehicles is the problem, I have already spoken with the Government Savings Bank. They have agreed to offer special low interest rates for taxi drivers needing finance,” Governor Maitri said.