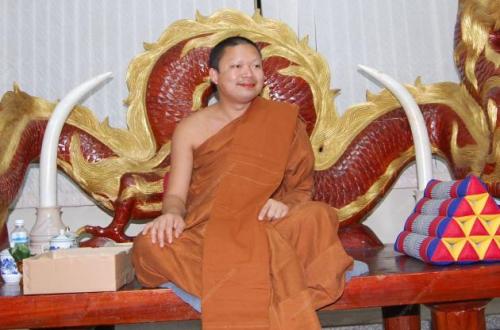 
Monk had 10 bank accounts with daily transactions of Bt2m
The Nation / Phuket Gazette
PHUKET: The Anti-Money Laundering Office (AMLO) has found 10 bank accounts under the name of Luang Pu Nenkham, who calls himself the abbot of Si Sa Ket’s “Wat Pa Khanti Dhamma” monastery, as well as records of transactions totalling up to Bt20 million per day.

Suwanee Sawaengpol, AMLO deputy chief, yesterday pointed out that these bank accounts were being monitored for fraud and hence any further transactions could result in the monk facing money-laundering charges.

Suwanee said investigation showed that more than Bt2 million moved from each of the accounts every day and, under law, the bank was required to notify AMLO of these transactions.

The agency is confident that it has enough evidence against the monk and his network of disciples and that they can be prosecuted under charges of violating the law and public fraud, she said.

AMLO officials will visit the monastery next week to gather witnesses and the agency will also seek approval for full asset investigation against the monk and his network from the Transaction Committee on July 17, she added.

Meanwhile Ubon Ratchathani’s Wat Tai Phrachaoyai Ong Teu abbot Phra Rajathamkosol said the temple where Luang Pu Nenkham or Phra Weerapol Sukpol was ordained had set up a panel to look into the monk’s activities and if he is found guilty of abusing his vows, he will be expelled.

In related news, the Si Sa Ket Buddhism Office reported that a fact-finding panel was set up to look into all allegations, including the monk’s penchant for luxurious products and women, donations, building a Buddha image replica without permission as well as illegally building a monastery and its branches.

The committee had initially agreed to set up a disciplinary probe in which the monk, who is still living abroad, would be required to testify in person.

Luang Pu Nenkham hit headlines last month after he “disappeared” amid a scandal involving him being shown in a YouTube video on board a private jet with brand-name sunglasses and carrying a Louis Vuitton bag, and accusations that he was pictured lying next to a woman (story here).

PM Yingluck Shinawatra yesterday rejected talk that new Labour Minister Chalerm Yoobamrung was unhappy with his change of position, denying any dispute between her and Chalerm.

However, Pheu Thai MP Anan Sriphan, who is close to Chalerm, said yesterday the former deputy PM was unhappy with the latest change, as he had been “demoted”. However, he did not think Chalerm would resign soon, as speculated.

The Cabinet met yesterday to distribute work and responsibility among seven newly-appointed deputies for the Prime Minister, who will work in her capacity when she cannot carry out her PM duties.

Yingluck oversees the Office of the Permanent Secretary, the Public Relations Department, the PM’s Secretary General, Secretariat of the Cabinet, Royal Development Projects Board, National Economic and Social Development Board, His Majesty’s Principal Private Secretary, the Council of State, the Royal Household Bureau and Internal Security Operations Command.

Surapong oversees the Foreign Ministry, the ICT and Science and Technology ministries, and the National Research Council of Thailand.

Niwatthamrong oversees the Commerce Ministry, Agriculture and Cooperatives Ministry (Rice and Agricultural Promotion only) and the National Economic and Social Advisory Council.

Plodprasop oversees the Natural Resources and Environment Ministry, and the Labour Ministry.

Kittiratt oversees the Finance Ministry, the Transport Ministry, the Industry Ministry and the Budget Bureau (except approving the budget).

Phongthep oversees ministries for Social Development and Human Security, Energy, Culture, Education, Public Health, the Consumer Protection Board, the Civil Service Commission, the Public Sector Development Commission. He also has authority to endorse a prosecution indictment against the PM in cases related to her administration.


Yingluck may face charges if govt doesn’t follow court order: activists
The Nation / Phuket Gazette
PHUKET: Environmental activists and engineers have warned Prime Minister Yingluck Shinawatra she will face impeachment if her government does not follow the Constitution and conduct public hearings to truly listen to opinions from people who may be affected by its massive water-management scheme.

Organising exhibitions would not suffice, they said.

“If the government does not follow good practice for public hearings for its water mega-scheme and the order by the Central Administrative Court, the government will also face another lawsuit to the Criminal Division for Holders of Political Office in the Supreme Court for failing to comply with the Constitution. It will also face impeachment,” said Hannarong Yaowalers, who chairs the Foundation for Integrated Water Management.

He was speaking at a seminar on “Good Engineering Process and Public Hearings for the Water Management Project” held by the Engineering Institute of Thailand.

His warning follows a comment by Deputy Premier Plodprasop Suraswadi, who chaired a Water and Flood Management Commission meeting last week and vowed to conduct “public hearings” by organising an exhibition and an event to collect opinions about the water and flood management scheme.


Sudarat cleared in graft case
The Nation / Phuket Gazette
PHUKET: The anti-graft agency yesterday resolved unanimously to clear former public health minister Sudarat Keyuraphan of malfeasance charges in a case stemming from her decision in 2003 to scrap a Bt911-million project to buy computers for the ministry.