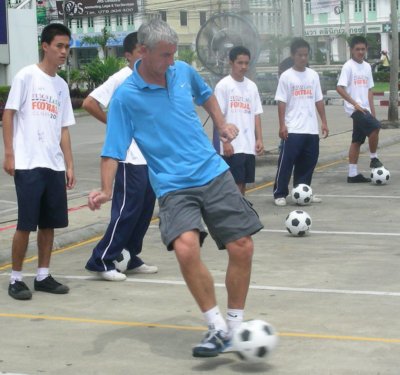 WICHIT: Former English Premier League star striker Ian Rush was among a group of famous footballers who conducted a short football clinic in the parking lot of the Tesco-Lotus supercenter this morning.

Rush, a Welshman, is best remembered as Liverpool’s leading scorer with 346 goals for the club between 1980 and 1996.

Some 60 lucky youths from three local schools attended the clinic, the last in a series of sessions organized by Tesco Lotus after clinics in Bangkok and Chiang Mai.

Liverpool fans excitedly lined up for an autograph-signing session that took place before the training got underway.

Then, under the watchful eye of Mr Rush and his associates, the youths were divided into groups of 20 and instructed in shooting, passing and ball control techniques.

In keeping with his name, Mr Rush and friends’ visit was a brief affair. The group was scheduled to fly back to the UK this afternoon.

John Barnes, who was also scheduled to attend this morning’s session, had to fly back to England yesterday on urgent family business and was unable to attend.