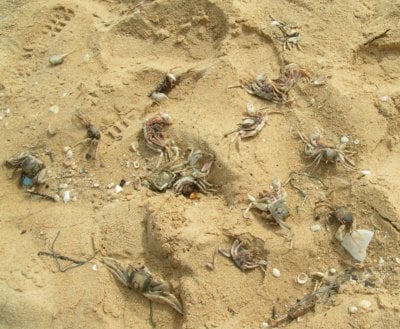 MAI KHAO: Hundreds of red frog crabs, or phu jakkajan, and other species of crabs and sea urchins were found washed ashore on Sai Kaew Beach on Sunday evening. Many of the sea animals were dead, possibly poisoned by fishermen, said Somkiet Khokiettiwong of the Phuket Marine Biological Center (PMBC).

“PMBC staff went to Sai Kaew Beach yesterday and collected samples of the seawater there and the remaining crabs that were still alive, but struggling. We put the crabs in seawater from in front of our office [at Cape Panwa], which we know is not contaminated with any chemicals, and the crabs started showing signs of recovering,” he said.

“We also put some crabs in seawater collected from Sai Kaew Beach and monitored them, and they seemed to recover just the same. We checked the seawater at Sai Kaew Beach and it tested normal, with no problems of oxygen levels or any other problems,” K. Somkiet added.

“Some local villagers said they had seen fishermen sprinkle harmful chemicals on the beach. This is one way of catching aquatic animals such as red frog crabs, which sell for quite high prices.”

“However, this is difficult for us to check because the chemicals might have dissipated before we have the chance to check,” K. Somkiet explained.

“We have yet to determine the true reason why the crabs and other animals died. We will continue to investigate further.”

“I would like to ask people who see any problems like this to please call us immediately – do not wait one or two days, as has happened in this case,” he urged.

“Also, people should not eat any dead marine animals they find on the beach because they might contain chemicals.”