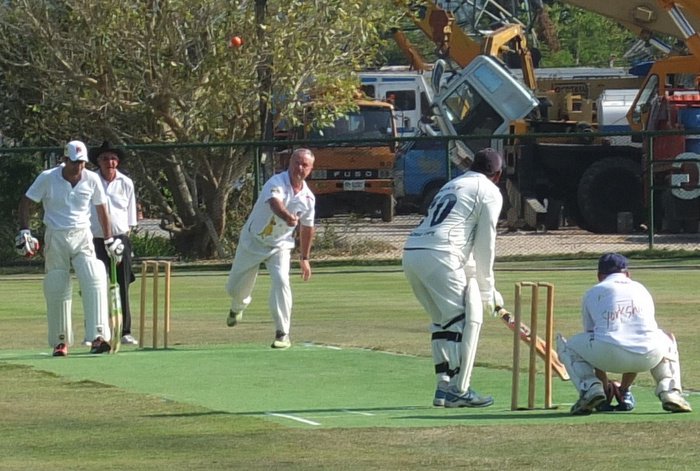 PHUKET: The Island Cricket Club (ICC) held onto its top position in the league with a 8/192 to 6/190 victory over the Thalang Cricket Team in a sea-sawing contest at the Alan Cooke Ground in Thalang last Sunday.

Both teams fielded strong sides, with ICC bringing in Vaigankar and Mydeen while Thalang named Buck, Culpan, McMillan, Thomatos and Murphy in their side.

Thalang weren’t able to make the score board light up, and at the first drinks break they were a meager 1/24.

After the break, the ICC bowlers were able to lure the batsmen into playing some attacking strokes, and finally netting some wickets.

Culpan was spectacularly caught by Vaigankar at point; Simon Wetherell hit the ball straight up and was also caught out, while Stahmer was adjudged leg before wicket (LBW) after scoring 22 runs from 47 balls.

Thomatos then made his long-awaited return to the crease and built a solid partnership with Murphy.

ICC skipper Chand switched the ball between his bowlers, but it wasn’t until the 34th over that that partnership was broken. Thomatos 42 (off 45 balls) was caught after he mistimed a pull shot from the bowling of Ventrapatti: Thalang were 5/156.

Murphy 38 (off 42) was bowled by Chand and back in the shade soon after Thomatos.

ICC’s Sami, Virdikar and Chand continued to bowl a tight line, and it wasn’t until the last over of the innings bowled by Naik that the Thalang batsmen had the better of an ICC bowler. Alex Runhaar hit a six from a no ball and Thai cricketer “Pao” found the fence a few times to take 18 runs from the over to set ICC 191 to win.

ICC began their innings facing a hot first over from Thalang’s Culpan. Thalang thought they had their first wicket on just the fourth ball of the over, when Culpan found the edge of the bat. Umpire King’s finger stayed down, and once the dust cleared ICC opener Mohammad took advantage of the frustrated Thalang players.

Mohammad plundered 40 runs in leg-side boundaries during the next four overs, before Runhaar took one of the running catches of the season at deep fine leg to end Mohammad’s scoring streak.

Thalang were to regret a couple of dropped catches in the next session of play. A broken finger put an early end to Barrie Buck’s match, and the match started slipping out of Thalang’s grasp when Sam Ali dropped a simple catch.

Vickky Mehra’s good fortune and clean hitting allowed him to mass 59 runs. ICC scored 60 runs for the loss of three wickets in the session.

Needing only 34 runs to win from the last 10 overs with five wickets remaining, Thalang skipper Stahmer threw the ball to McMillan. He picked up two wickets off his first over and there would have been a third if not for Thalang’s Wetherell instructing the umpire to change his decision.

Thalang dropped another two difficult chances near the boundary rope before ICC all-rounder Mydeen hit a six to bring up the winning runs in the 36th over.

The result keeps ICC on the top of the Phuket Cricket League table after seven matches, with Patong to play the Village at the ACG this Sunday.