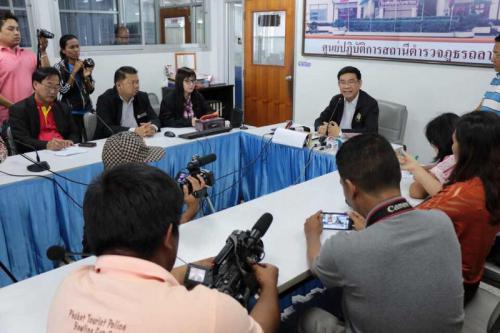 Perhaps the most significant obstacle to be jumped is getting the party list ballots for Phuket out of Chumphon Province and distributed throughout the island.

Protesters in Chumphon are preventing staffers at a post office housing the ballots from distributing them to other southern provinces, said Phuket Election Commissioner Somchai Srisutthiyakorn.

Also hampering progress for the snap national election is a lack of MP candidates.

“With no MP candidates and no party list ballots, voters won’t have anything to do when they visit the polls,” Mr Somchai explained.

“At this stage, I cannot confirm whether or not the elections will take place – we’ll have to wait and see if the ballots arrive. However, we will do our best to have officers and police ready to man the booths,” Phuket Election Commission Director Kittipong Thiengkunakrit told the Phuket Gazette this morning.

Mr Kittipong is struggling to rally the necessary nine officers to be stationed at each polling area. Without them, the polling stations cannot be opened.

“Despite everything, if the situation at the polls takes a violent turn, then the station chiefs have the authority to shut them down,” Mr Kittipong said.

In the event that Phuket is not able to hold the election tomorrow, it will be rescheduled for March, explained Mr Somchai.

Despite the uncertain circumstances, the nationwide alcohol ban will still start at 6pm today. It will stay in effect until midnight tomorrow.