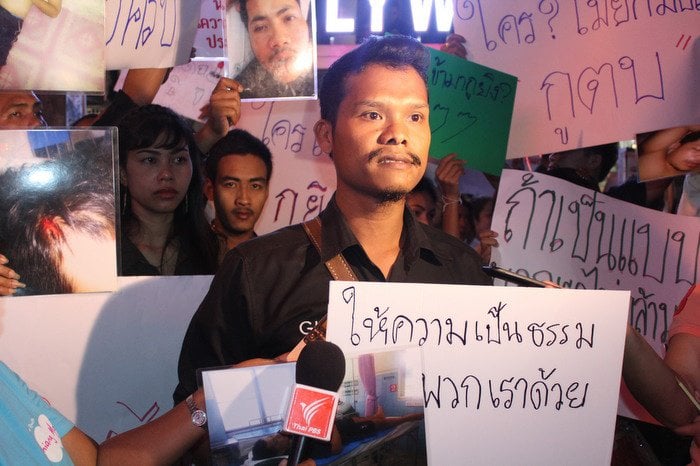 The rally formed outside Hollywood Discotheque at about 8:30pm, drawing much attention from tourists and passersby, with protesters demanding justice from police and Phuket Governor Nisit Jansomwong.

Some protesters wielded signs with messages including: ‘Why physical abuse?’; ‘Government officers bully residents’; ‘We are too scared to go back to work’; ‘Where is justice?’; and ‘We are just honest workers, not drug dealers’.

“We were working at about 2am as normal, when Col Sorapong and five or six of his friends came into the pub. All of the staff know them well,” said 31-year-old Kittipong Yanui, a colleague and close friend of Mr Kamolchai, who was working at the time of the incident.

“Col Sorapong walked past Kamolchai and said ‘Why do you keep staring at me?’, and then pulled Kamolchai’s shirt collar and punched him in the face.

“We tried to stop Col Sorapong, but we couldn’t. He said, ‘Don’t come closer or you will get shot’.

“After several more punches, I begged him respectfully with a ‘wai’ to stop but it didn’t work. Then he and his friends left the club.”

Mr Kamolchai was taken to Patong Hospital, said Mr Kittipong. However, police were not called after the incident.

“We were afraid to report this to police because the suspect is a high-ranking policeman. Some of us were afraid that our lives would be in danger,” he said.

Mr Kittipong’s version of events and details of who exactly was involved have yet to be confirmed by CCTV footage from within the club, Phuket Provincial Police Commander Patchara Boonyasit told the Phuket Gazette today.

“The only suspect we know of right now is Col Sorapong. We cannot confirm whether or not anyone else was involved. We have to investigate and collect more evidence,” he explained.

Patong Police Deputy Superintendent Akanit Danpitaksat went to the protest last night to meet with the club owner and to assure the crowd that no one’s life would be threatened as a result of the incident.

“Everyone here should feel safe. We promise that a situation like this will not happen again,” he said.

“We have already begun investigating and will do our best to find the truth.”

Col Sorapong has been transferred for one month to Phuket Provincial Police headquarters in Phuket Town during the investigation.