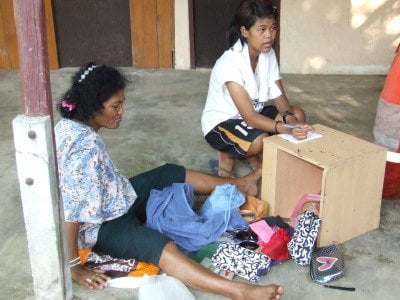 PHUKET: A young girl and her mother lost what few possession they owned to a house fire yesterday, leaving them without money for their monthly motorbike rent or for the girl’s school fees.

Prapha Pongkunchorn, 52, and her daughter Mookrin Pongkunchorn, 16, had been living rent-free in the house, which had been converted from a garage and had no address, for about two years.

They were sitting in the storeroom adjacent to the house when the fire started.

“We saw sparks fall and set fire to the roof. We rushed to get as much out of the house as we could before the fire spread,” Mrs Prapha told the Phuket Gazette.

“We weren’t able to save about 6,000 baht that was [hidden away inside in the home] for our monthly motorbike rent and my daughter’s schooling. I also lost my gold necklace,” she said.

Four fire trucks manned by nearly a dozen firefighters responded to the emergency call, but although they contained the fire within 15 minutes, the damage was done.

The blaze had completely gutted the home.

“It’s likely that a spark from the old electrical wiring above the house caused the fire. To be sure, forensic officers will investigate today or tomorrow,” said Thung Thong Police Duty Officer Watthanathon Bamrungthin, who examined the ruins.

Mrs Prapha explained that this wasn’t the first time their home had been threatened by flames.

“People were playing with firecrackers and some of them fell on the roof. That time we put the fire out by ourselves,” she said.