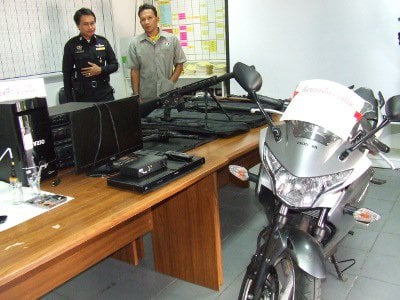 PHUKET: Phuket Police are still investigating where the remainder of the two million baht in foreign currencies has disappeared to from the robbery of a currency exchange booth in Karon in November.

At a press conference at Chalong Police Station yesterday, Phuket Provincial Police Commander Chonasit Wattanavrangku said his officers were still investigating where most of the money had gone, though they already had confirmation that some of it had been used to fund a spending spree.

The press conference was called to present to the media the two suspects who were arrested for the crime on Sunday.

Amnard “Tor” Ponpramun, 21, and Kriangsak “Jae” Jintaphakul, 25, were both arrested after a traveller’s cheque marked as stolen in the robbery was presented at the Siam Commercial Bank branch at the Tesco Lotus supercenter on the bypass road.

Amnard, an employee of the bank, was on duty at the currency exchange booth when the robbery was carried out.

Both men have been charged with conspiracy to commit armed robbery at night.

“We are still investigating where the rest of the two million baht has gone,” he said.

Chalong Police Superintendent Krittapad Dej-intorrasorn said, “We will find the rest of the money. We will check bank accounts and any other way they may have hidden it.”

However, Col Krittapad quickly added, “We suspect that some of the money has already been spent on a variety of things, such as a Honda CBR motorbike costing more than 100,000 baht, four BB guns and ya ice [crystal methamphetamine], which our investigation has revealed that Kriangsak was a regular [user] of.”

In front of the press, Amnard confessed to Maj Gen Chonasit that the robbery was a spur-of-the-moment idea, because they both needed money.

Col Krittapad explained that a combination of factors pointed police to the two suspects.

“Also, just seconds before Kriangsak broke into the booth, the light was turned off by Amnard. Actually, it was his colleague Wilaiwan Khao-ong, 22, whose regular duty was to switch off the light,” he said.

Kriangsak hid his face from Wilaiwan and covered her eyes with tape, but he was not afraid for Amnard to see his face, said the colonel.

“Other factors included that Amnard did not seem to make make any attempt to dissuade Kriangsak from opening the safe, and during police questioning on the day, Amnard seemed very nervous, so the investigating officers kept an eye on him,” he said.

In the end, however, it was not until Kriangsak’s sister-in-law on Saturday presented a traveller’s cheque marked as stolen that police could move in and make their arrests.

The sister-in-law, whose name was not reported, presented the cheque for cashing at 2pm.

When she returned at 4pm, Chalong Police officers were waiting for her.

Following this confirmation, his officers moved in and arrested the two suspects, he added.