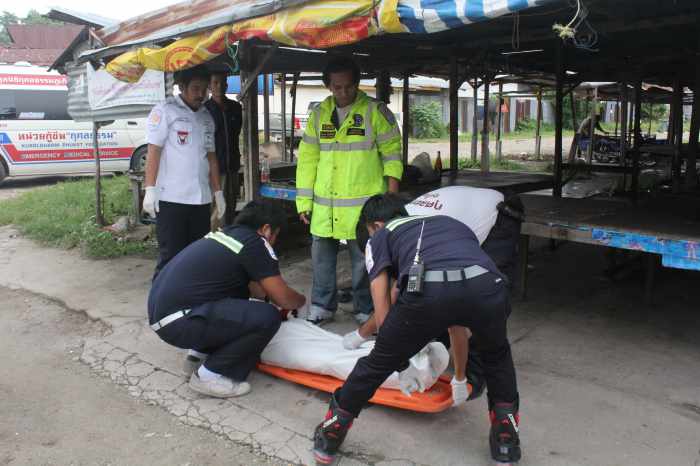 PHUKET: A homeless man from Nakhon Sri Thammarat was found dead early this morning lying on top of an empty market stall in Phuket Town.

Police and Kusoldharm Foundation rescue workers were notified at 7:15am about the body located at the Norrahuch intersection market near the Phuket Provincial Administration Organization Hospital.

“We found the body of Tienchai Kornsut, 42, lying shirtless on top of a worktop used to sell items at the market. There was a half-empty bottle of beer next to him,” said Capt Udom Petcharat of the Phuket City Police.

“We questioned locals about Mr Tienchai, and were told that he drank every night and always fell asleep there.”

Police found no signs of a struggle on the body, and believe that Mr Tienchai died from an alcohol-related illness, explained Capt Udom.

“Rescue workers transferred the body to Vachira Phuket Hospital where doctors will confirm the cause of death. Mr Tienchai’s relatives will be notified,” Capt Udom said.