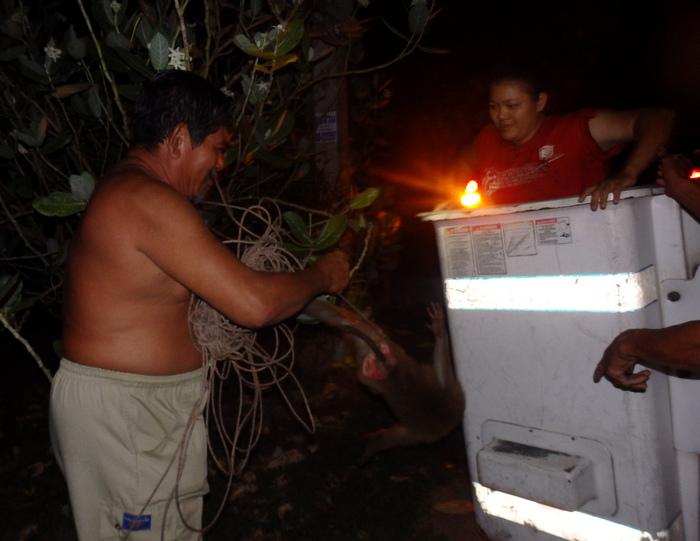 PHUKET: Rescue workers were called last night to save a bean-picking monkey that had escaped from the home of its owner and become stuck at the top of a power pole.

“When we arrived, the owners were trying to undo the rope tied to the monkey’s neck, because it had become tangled on the pole,” said a Kusoldharm Foundation Rescue worker.

The power pole, in Baan Lipon, was so high that a cherry picker had to be used to retrieve the young animal.

“It was a high voltage line, and we were concerned about electrocution, so we called the Thalang Electricity Office for help. When their officers arrived with the equipment, they shut off the power for about 15 minutes so we could get the monkey down safely,” the rescue worker said.

Chamaiporn Hemkaew, 32, one of the owners, told the Phuket Gazette that the monkey is about one and a half years old and employed.

The little sataw-harvester had escaped from Ms Chamaiporn’s house and run up the nearby pole before she could be stopped.

“I’m very grateful to everyone who helped rescue my baby, especially the Thalang Electricity Authority Manager who allowed his staff to use their equipment to rescue her,” said Ms Chamaiporn.

“We will take better care of her in the future so she doesn’t make trouble for others again.”