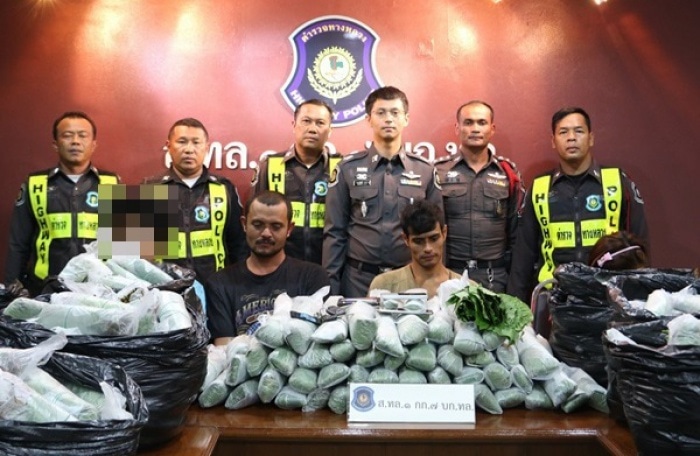 KRABI: Phang Nga Highway Police arrested four people, including one minor, at a Krabi checkpoint yesterday for the possession of 130 kilograms of kratom.

Kitti Kongderm, 33; Chalee Kongderm, 30; Nuchanat Chorfai, 27 and a 17-year-old minor referred to by police only as ‘Daeng’, were driving two separate cars, carrying a total of 13 bags of fresh kratom leaves.

“During a random check, we stopped a vehicle belonging to Mr Chalee. While we were checking the car, Mr Chalee called someone to tell them that he was stuck at a checkpoint,” said Maj Thammasak Pholdet of the Phang Nga Highway Police, who police Phang Nga, Krabi and Phuket. “We then saw another car about 500 meters from the checkpoint immediately stop and turn into a small soi in a palm plantation.”

Police chased the car through the plantation until it crashed into a ditch and the suspects were apprehended.

“In the vehicle driven by Mr Kitti we found the bags of kratom. When we checked his mobile phone, we could see that he was the person Mr Chalee had called to warn about the checkpoint,” Maj Thammasak said.

Mr Kitti told police that he had received the kratom from a Malaysian man in Hat Yai and was paid 5,000 baht to deliver it to someone by the name of ‘Mr Yupin’ in Phang Nga.

Though Mr Kitti told officers that the other three men were not involved in the drug deal and were only accompanying him, they were all charged with possession of a Category 5 drug.