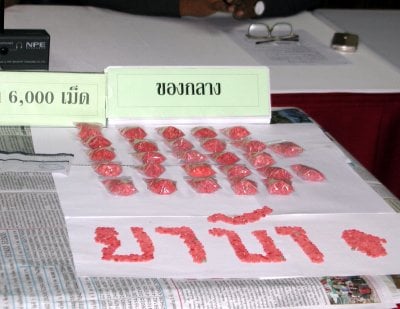 PHUKET: Top provincial officers have balked at a plan to install a drug-detecting “X-ray machine” at the Tah Chat Chai checkpoint after learning the cost would run well over 250 million baht.

Phuket Provincial Police on August 11 dispatched a team of officers to the northeastern province of Nong Khai to observe a drug detection unit in action at a border checkpoint there.

Effective or not, costs of installation and upkeep are prohibitive, the committee was told.

It would cost about 250 million baht for one unit, with monthly maintenance fees of about one million baht.

“The price is just too high. It is not worth the investment, so the province will have to come up with alternative strategies,” the governor said.

According to the Police Region 8 Narcotics Control Center, Phuket had 2,230 drug cases with 2,431 arrests from October last year through June this year.

The vast majority of cases involved ya bah (methamphetamine), with 68,240 pills seized.

The number of drug arrests related to ya bah is clogging up the judicial system, the committee was told.

A key stumbling block is the length of time it takes to verify analyses of people who test positive for ya bah during urine tests for the drug. These results need to be verified through blood analysis, but there is no laboratory on the island capable of doing this work and the samples need to be sent off-island, to Trang.

As a result, many of those who test positive are never charged, the committee was told.

To help solve this problem, the Phuket Public Health Office will send an official letter to the Governor’s Office to request funding for permanent staff to conduct this work at the Phuket Medical Science Center in Baan Bangjo in Thalang.

Gov Wichai said good cooperation among all related agencies could definitely reduce the drug problem on the island.