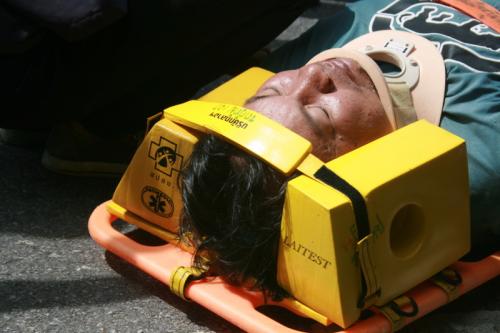 PHUKET: A helmeted motorbike driver was non-responsive but alive after crashing his motorbike into a drainage ditch while descending Patak Road toward Chalong this morning.

Ruamjai foundation rescue workers quickly arrived at the scene and placed the man, Surat Udompol, 53, in a neck brace before loading him into an ambulance and rushing him to Vachira Phuket Hospital in Phuket Town.

“At the scene, we found him laying in a ditch. He was non-responsive, but breathing,” Ruamjai foundation rescue workers told the Phuket Gazette.

“He lost control of the bike and overshot the curve.”

The motorbike left a visible trail in the narrow strip of soil and gravel between the road and the drainage ditch, which was about one meter deep, an eyewitness at the scene said.

Phuket crackdown on wastewater pollution in the works