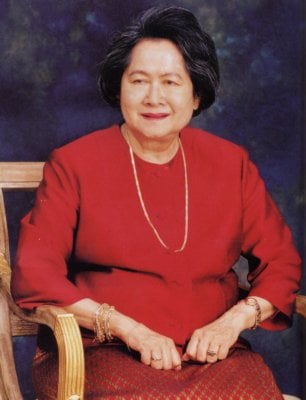 BANGKOK (Nation): After months of receiving treatment for cancer, HRH Princess Galyani Vadhana’s condition deteriorated last night and she passed away 2.54 am this morning. She was 84.

The Princess had been receiving treatment for cancer at Siriraj Hospital for months. Well-wishers had flocked to the hospital since the news spread that she was admitted.

The Princess is the elder sister of two kings of the Chakri Dynasty, HM King Rama Ananda and the current monarch HM King Bhumibol Adulyadej.

The royal funeral will take place at the Dusit Mahaprasart Throne inside the Grand Palace. People who want to pay their respects to the Princess should attend the Sala Saha Thai Samakom at the Grand Palace from 1 pm to 4 pm today.

The mourning period started yesterday and will continue until the 100th day of her departure, the Royal Household Bureau has announced.

Shortly after the news of her death was announced, people in black dress rushed to the hospital to pay their respects to the portrait of Her Royal Highness posted there.

The Gazette extends its sincerest condolences to the Royal Family for their loss.