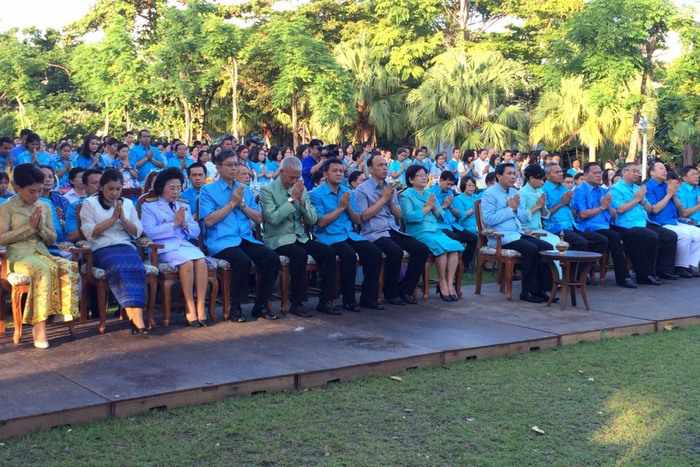 PHUKET: Mother’s Day kicked off in Phuket this morning with an early morning celebration in honor of HM Queen Sirikit’s 82nd birthday at Sirikit Park on Thalang Road, Phuket Town.

The governor, vice governors, Phuket’s top cop Commander Krajang Suwannarat and a host of other Phuket officials and local residents were dressed in blue attire for the occasion, the color of HM Queen Sirikit.

After the alms-giving ceremony, Governor Maitri and his wife, Pavinee, attended a ceremony at Satree Phuket School, where they joined well-wishers in signing a congratulatory book for Her Majesty.

Many more events are scheduled today to mark the special birthday and Mother’s Day throughout Phuket (story here). The schedule of remaining events is as follows:
https://thethaiger.com/phuket-news/Phuket-ready-celebrate-HM-Queen-Sirikits-birthday/32515

Patong
5pm – Governor Maitri will lead a homage-paying ceremony at the main stage at Loma Park.

Kathu
5pm – The evening’s event will be held in front of the Kathu Municipality Office. Scheduled entertainment includes performances by students from schools in Kathu District, as well as a “Most Outstanding Mother Award”.

Blood donations
The Phuket Blood Center is calling for donation, and offering a special gift for those that give on Mother’s Day.

At Vachira Phuket Hospital, staff will give donors a small tree of jasmine, regarded in Thailand as a symbol of Mother’s Day. Donations will be accepted from 8:30am to 6pm. For more information call 076-36123 ext 1285.