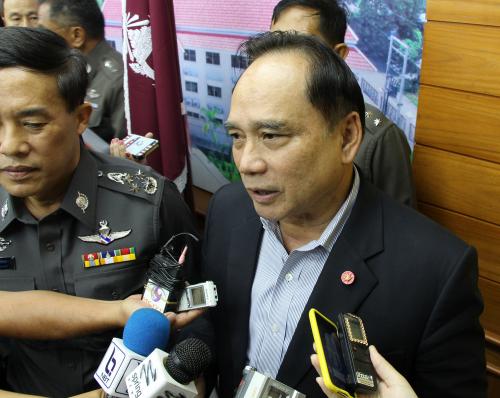 PHUKET: One of Thailand’s top-ranking police officers has ordered Phuket law-enforcement authorities to ramp up their crackdown on all forms of crime over the weekend as part of a blitz to improve tourists’ confidence in safety.

Gen Wuthi Liptapallop, a national-level adviser to the Royal Thai Police, was in Phuket yesterday to review progress made in the island-wide crackdown launched on August 16. The effort is scheduled to conclude on Monday (story here).

“I have ordered all officers to be more strict in enforcing the law. Police in each area must pay particular attention to all cases involving tourists, especially violent crimes.

“Tourist Police have been ordered to crack down on zero-baht tours and Immigration officers are to crack down on foreigners overstaying their visas,” Gen Wuthi told the press gathered at Phuket Provincial Police headquarters in Phuket Town.

Presented at the media conference were suspects arrested and items seized during the campaign, including several Myanmar nationals, illegal firearms, pirated goods and a slow loris.

So far during the campaign, Phuket Police have arrested 2,142 suspects, said Gen Wuthi.

Other arrests during the period included: 411 for drugs; 293 for prostitution; 276 for overstay; 177 for illegally entering the country; 123 for dealing in pirated goods; 48 for working without a work permit; 45 for possession of an illegal firearm; and 27 for working as an illegal guide.

“If the level of crime continues on the island after the crackdown concludes on Monday, I will order another campaign to be carried out immediately,” Gen Wuthi said.

“We will improve the image of Phuket and make tourists more confident in their safety during their stay here, which will help boost tourism and generate more income for Thailand,” he added.

“I really appreciate the police stepping up their efforts to crack down on all illegal activities, including drug dealers, mafia taxi operators, people with illegal firearms, and everything else that might be dangerous,” Gen Pichit told the press.

“This crackdown is making progress, so please keep working to eliminate all illegal activities in Phuket, and elsewhere in Thailand, to improve our safety,” he said.

Gunman Dj Bee on the run