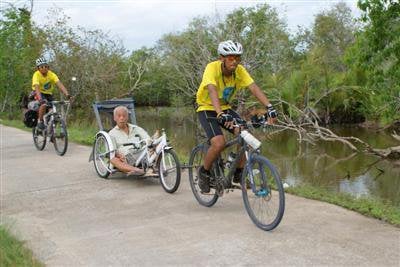 PHUKET: A cycling enthusiast impressed crowds at the 140th anniversary of Krabi Town over the weekend, managing to pedal all the way from Greater Bangkok with his disabled father riding in tow in a three-wheeler.

Kittipong Kongkaew, who runs a coffee shop in Tibet, was among members of the Thai Cycling For Health Association that set off from Samut Prakan on May 1 to attend the Krabi Town municipality”s 140th anniversary celebrations yesterday.

The event marked King Chulalongkorn (Rama V) granting Krabi the status of a town, under the administration of Nakhon Sri Thammarat, in 1872.

About 600 cyclists set off from Samut Prakan with 980 lamphu mangrove tree seedlings to be planted in Krabi as part of the celebrations.

But Mr Kittipong had more than a seedling to transport over the 800-kilometer distance. Riding behind him in a tricycle was his elderly dad, beaming with pleasure at the views after being housebound for years.

Despite the extra weight, Mr Kittipong arrived with the other yellow-shirted riders after five days on the road.

“I live in Tibet, but I make it home from time to time,” said the native of Nonthaburi province, just north of Bangkok.

“My dad is ill and doesn’t get to go anywhere, so when my friends invited me to cycle to Krabi, I decided to take him along. The idea was to make him happy as well as take part in the mangrove planting event. It worked. He is really having a good time,” he said.

Krabi Governor Prasit Osathanon welcomed the cyclists at a ceremony yesterday morning, after which the group rode off to a nearby mangrove forest to plant the seedlings.