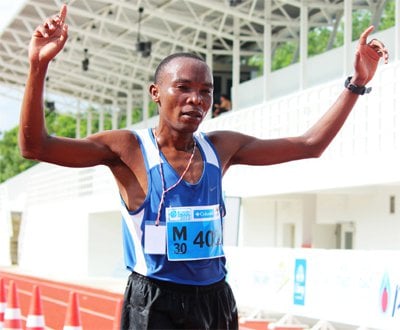 PHUKET: The second edition of the Columbia Trail Masters event was held at the Thanyapura Sports and Leisure Club (TSLC) on Sunday morning with far larger than expected crowds and participants making it a huge success.

Serge Henkens, managing director of event organizer AMA Events, was overjoyed at the turnout as well as the way the event panned out.

“It was a fantastic event and I still can’t believe how many people showed up”, said Henkens after the races had been completed.

“Trail running is still an up and coming sport and to see so many people on the island embrace the unique challenges that the sport presents is really heart-warming.”

Trail running is different from simple road running in more ways than just the terrain the race is run on. Hydration, joint impact effects as well as unique navigation challenges make trail running a more enjoyable form of endurance racing.

“It’s different in that we are not just plodding along the road in a straight line”, said Tony Henthorne from the United Kingdom who participated in the 10km run.

“Besides the beautiful scenery, the reduced pressure on my knees is such a relief, running on soft ground, and the up and down nature of the course as a result of the hills is also something different. I loved it!” said Henthorne.

However, all racers who went home, with or without a trophy, left with a smile on their face and a great sense of accomplishment.

The Phuket Gazette and PGTV were proud to have sponsored this inaugural trail running event for Phuket.