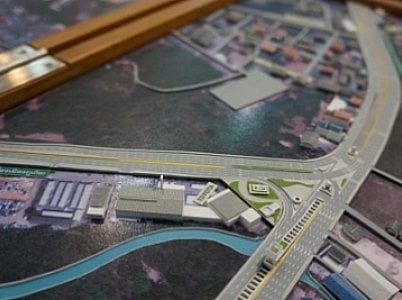 PHUKET: Vice Governor Somkiet Sangkaosutthirak at Phuket”s Boat Lagoon Resort Tuesday, chaired the third and final public hearing on the Bang Khu intersection improvement project, at which it was announced that a two-lane underpass construction had been selected over other designs.

At the meeting, project manager Kaweerat Deeprasertwong announced the selected design for the two-lane underpass.

“We chose this design because it has the least impact on local residents and the environment,” Mr Kaweerat said.

“Motorcycles will not be permitted to use the underpass. Instead, motorcycles coming from Phuket Town heading toward the airport will use a dedicated lane on the surface. They will be subject to traffic light control at the junction,” he said.

Mr Kaweerat revealed another traffic-flow plan drawn up in response to comments made by local residents at previous public hearings.

“After all the comments from local residents, we realized that Koh Kaew intersection (north of Bang Khu) is another heavy-traffic area during peak hours. So we’ve come up with plan to improve traffic flow there,” said Mr Kaweerat.

“Currently, the road in that area consists of six lanes, three on each side. We plan expand the road to eight lanes, four on each side. This will manage the traffic better with shorter waiting times at the traffic lights from each direction,” he added.

Earthquakes are a new experience for the people of Phuket, but the underpass will be built to withstand any future tremors, Mr Kaweerat said.

“We designed the underpass to handle earthquakes up to about 6.0 on the Richter scale,” Mr Kaweerat said.

Somporn Ratanaburi, a civil engineer with the Department of Highways, detailed some aspects of upcoming underpass projects.

The traffic at Thainaan [Central Festival] Intersection and Tesco Lotus Intersection are also bad during peak hours, he explained.

“We are going to solve the traffic issue at these two intersections with underpasses. The Thainaan Intersection underpass project has already received a budget of 600 million baht for fiscal 2012 and is ready for construction,” said Mr Somporn.

“Both the Bang Khu Intersection and the Thainaan Intersection will use the same type of underpass. The Department of Highways hired a consulting company to study and create an underpass design that will be the most appropriate for traffic volume, while minimizing impact on local residents and the environment,” he said.

“The project at Bang Khu Intersection, to cost about 450mn baht, is part of our 10-year traffic plan. We are working on the budget right now, but the project will definitely be moving forward,” he added.

Mr Somporn also addressed concerns about traffic during the construction of the underpass.

“We plan to start the project by expanding the road. This way we will have more lanes available for vehicles when it comes time to close one side of the road for construction,” he said.

“The Thainaan Intersection underpass project is under the final budget review process. Once we establish the exact costs we will open it up for bidding to companies interested in the contract,” he said.

“Construction will start soon since the budget for the fiscal year 2012 is available,” he added.

Despite the public hearing process, there are still some local residents who are unhappy with the final plan.

Yotin Klinbuakaew, from Koh Kaew Village 5, pointed out that those who are directly affected by the road expansion project are residents of Villages 4 and 5. However, they still do not know exactly the project will impact their lives.

“I’m not interested in talking about the underpass project, because everyone in Phuket already knows about it. However, the road expansion project in Koh Kaew area needs to be addressed. If they are going to start a mega-project in front of our houses, don’t you think we have a right to know the details about the project?” he asked.

“Since this project will completely change our lives, I would suggest the organizers come to the mosque in Koh Kaew Moo 4 and Moo 5 to hear what we think before they make any decision,” he said.

Mr Yotin went on to raise several concerns about traffic flow in the area, citing the issue of cars coming out of the Nanachart Road [the access road to British International School] having to quickly cut across three lanes of traffic in order to get to the u-turn to head south.

“I live in that area and I see near misses every day. That’s why I’m concerned about this issue,” he explained.

They are also worried about an expected increase in the future traffic volume of traffic as many residential estates now under construction in the area are completed.

“I would like to thank all villagers who attended the public hearing,” said Mr Kaweerat. “I have noted all of their comments and will use them to improve our plan. I want this project to have minimal impact on local residents. After all, we intend to make people’s lives easier with this project,” he concluded.