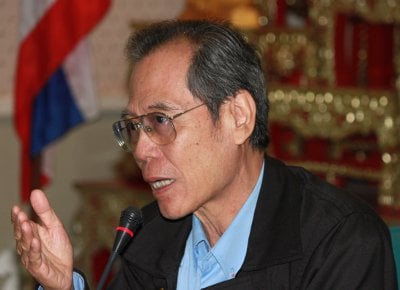 PHUKET: A team of National Anti-Corruption Commission (NACC) officers stopped in Phuket this week as part of a nationwide inspection tour aimed at putting an end to widespread encroachment on state forest reserves.

Kajadpai Burutpat, president of an NACC subcommittee investigating forest encroachment nationwide, said after a meeting at Provincial Hall with Phuket Land Office and Forest Department officers that official corruption leading to encroachment on state forest preserves was a nationwide problem.

“We are studying forest encroachment issues in our travels around many different provinces. Different areas have different problems, so we have to take a wide view before setting up measures to solve the problem,” he said.

Part of the tour involves meeting local officials to hear about the problems they face and encouraging them to live up to their responsibilities, he said.

“We study the specific problems faced by local officers in each area and make suggestions on how to deal with them. As government officers, we should work with honesty and integrity, having the courage to ensure justice for the benefit of the country and its people,” he said.

“We’ve [already] been to Chiang Mai, Tak, Nakhon Ratchasima and Prachinburi, all of which have major problems of encroachment on state forest land,” said Mr Kajadpai, a former deputy chief of the National Security Council.

The people who encroach on state forest reserves include a wide spectrum of the population, from hilltribe people clearing land for subsistence farming to wealthy investors using the land to build resorts.

The collective result has been the ongoing destruction of “hundreds of thousands” of rai of Thailand’s protected forest land, which is also the main cause of flooding in the country, he said.

What the subcommittee’s initial review of cases in Phuket revealed will come as little surprise to those who have followed the encroachment issue on the island over the past decade: that land grabs are typically committed on tracts for which land-use documents, typically SorPorKor or SorKor 1 papers, have been issued by the government – legally or otherwise.

“From our meeting today, we found that most problems result when boundaries between state land and private landholdings are poorly delineated, but the process of issuing land title deeds continues nonetheless,” said Mr Kajadpai.

As a result, the Royal Forest Department often discovers that SorKor 1 papers have been issued and, in some cases, resorts already built on land under its protection, he said.

SorKor 1 documents, which are government-issued papers recognizing historical land use by a private party, can in most circumstances be upgraded to full Chanote title deeds.

“People claim they have held these documents for a long time and have used the land for agricultural purposes. Now the Department of National Parks Wildlife and Plant Conservation wants proof in the form of aerial photographs to ensure the land was actually used for private benefit prior to 1954 [when modern Thai land law was established],” explained Mr Kajadpai.

Only in such cases do SorKor 1 holders have legitimate claims to land administered by the Royal Forest Department, he said.

One way to end the abuse would be to establish a special committee to guarantee beyond any doubt that plots for which SorKor 1 papers are held do not encroach upon protected forest before they are upgraded to full Chanote status, he said.

“If possible, local officers should not just sit in the office and examine documents, but go out and inspect the site in question to ensure there are no discrepancies,” he said.

Panumet Dam-on, chief of the Royal Forest Department’s conservation unit, told the meeting that whenever he tried to use the rule of law to protect forest reserves, he was hit with complaints and lawsuits filed by investors.

Maj Gen Kittisak Marom, another one of the NACC subcommittee members in attendance, said that all government officers are duty-bound to abide by the law. He also warned that officers who fail to take action to stop illegal activity face prosecution for dereliction of duty and possible dismissal from the civil service.

Skyrocketing land prices, with the prime plots now selling for as much as 200 million baht per rai, had fueled the encroachment problem in Phuket and led to the destruction of forest reserves. Most of the encroachment was the result of investors who are not from Phuket, he said.

The subcommittee is meeting with local officers nationwide in June and July, after which it will report its findings to the NACC board for preparation of a report to be submitted to Cabinet, Mr Kajadpai said.

Believing that existing laws provide a fertile channel for corruption, the NACC might recommend new regulations to stem the abuse, or even a complete overhaul of existing forest protection laws, the panelists said.