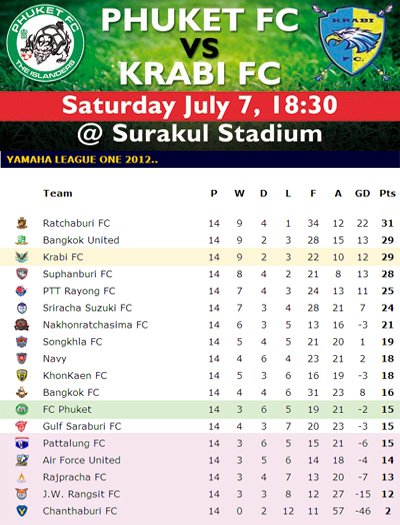 PHUKET: A large crowd is expected at Surakul Stadium in Phuket this evening, when a resurgent Phuket side will be gunning for its third consecutive home win against higher-ranked southern rivals Krabi FC.

Fans who want a guarantee of keeping dry for the match are advised to arrive at the stadium well ahead of the 6:30pm kickoff, as covered seating is limited.

The 24-hour forecast by the Meteorological Department calls for “very cloudy conditions with fairly widespread thundershowers covering 80% of the area and isolated heavy rain with gusts.”

A heavy rain warning, now in its third day, also remains in effect throughout the day.

Whatever the conditions, the Islanders are expected to go all out to take three points from the Andaman Eagles, who are coming off a 2-0 away win against Air Force United and have lofty aspirations for promotion to the elite Thai Premier League.

“We have been training real hard for this match, and everyone would like to win,” said Marcio Santos, the 25-year-old star midfielder from Brazil.

Marcio, Islander #4, confirmed that he would be one of the 11 starters in tonight’s match, but could not say who else would be joining him on the pitch. Asked about the team’s strategy, he said he anticipates the team to adopt an attacking formation.

“The coach really wants us to press and challenge for possession more so that we can open up more scoring opportunities,” he said.

Marcio is no stranger to success. Prior to signing with Phuket this season, he played for Okkthar United FC in Myanmar, which won both the 2010 Myanamar National Cup and the 2011 Singapore International Cup.

Before that, he played for Mahidol University-based squad Rajpracha FC, helping that side become Division 2 Bangkok Metropolitan Champions, and thus go on to promotion to Division 1 the same year.

“They are a very strong attacking team, but if our defense is able to close spaces quickly we should be able to get them on the counter-attack,” he said.

Indeed, Alonso expects to see a lot of action from Krabi’s high-scoring strike force, which includes three foreigners: #9 Soukaphone Vongchiengkham from Laos, who leads his team with four goals so far this season, as well as Brazilian striker #18 Cristiano Lopes Figueredo, who has netted two goals.

Also expected to stress the Phuket backfield will be a familiar face: #18 Carlo Coppari. The Italian, who has experience in Italy’s Series B (Division 2), tried out for Phuket last season but was not signed due to budget constraints at the time.

It will be the first home derby of the year for FC Phuket, whose next home game will be against another southern rival, Songkhla FC, on July 22.

Other Yamaha Division One matches this weekend: