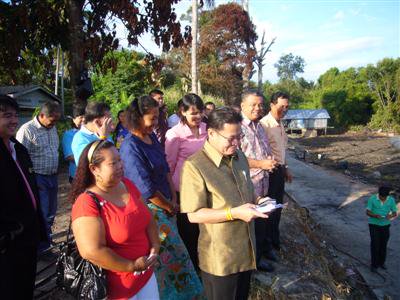 MAI KHAO, PHUKET: The central government is preparing to build temporary housing for the 17 sea gypsy families whose modest homes were destroyed by fire on the afternoon of June 29.

For our initial report about the fire, click here.

Accompanied by Democrat Party MP Rewat Areerob, Mr Issara greeted the 17 homeless families and presented each with 3,000 baht in cash along with supplies including rice, palm oil and kitchenware such as pots and pans.

Mr Issara said each family would be provided with “temporary” homes to cost about 120,000 baht each.

“We will begin construction as soon as possible,” he said.

However, Mr Issara also encouraged the sea gypsies – whose homes tend to be little more than seaside shacks – to build more permanent accommodation in the future under the Social Development and Human Security Ministry’s “Stable Homes” project.

Under the terms of the project, the sea gypsies would have to form a co-operative and take out a government loan to build homes under a long-term lease agreement.

Boonchuey Varee, whose home was destroyed in the blaze, said that in the short term the community members’ first priority was just to get shelter.

They would consider the ministry’s offer once that is accomplished, he said.

The Ban Hin Look Diow community have lived at the current site in Mai Khao for six generations, much of it in almost complete isolation from the rest of Thai society.

Despite this, the community lacks land title deeds to the land they inhabit, which falls under the jurisdiction of the Forestry Department.

The community was one of 30 that rallied at Phuket Provincial Hall in early April this year to demand that then newly installed Governor Wichai Phraisa-ngop make good on promises made by his predecessor to provide them with water and electricity.

10-man Phuket FC slumps to yet another defeat