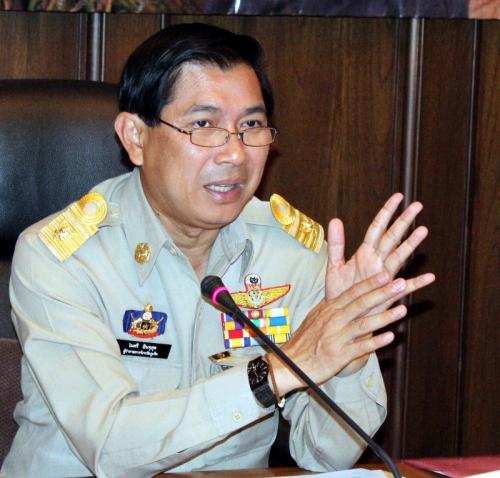 Such a flight would bolster the plans laid out in February by the French Ambassador to Thailand, Thierry Viteau, of inviting small and medium enterprise (SME) businesses to Phuket to discuss cooperative investment opportunities (story here).

One of the main points of discussion in the meeting between Governor Maitri and the mayor of Nice, Christian Estrosi, was the potential of French business owners expanding their enterprises to Southeast Asia.

“Nice is a coastal city and there are many marina business owners who want to expand their business abroad. Phuket is a potential location for these investors,” Gov Maitri said.

Mayor Estrosi and Gov Maitri also touched on the topic of education during their meeting.

“We are looking at providing more ways to offer French language courses to Phuket locals, so residents will be able to better communicate with French tourist on our island,” Gov Maitri said.

The pair also discussed ways to promote Thai culture in Nice. Gov Maitri proposed arranging a variety of cultural activities, such as a Thai walking street.

Phuket and Nice have been sister cities since December 1989, when an MoU between the two cities was signed.*

* The original version of this story stated that the MoU was signed on Gov Maitri’s recent trip.