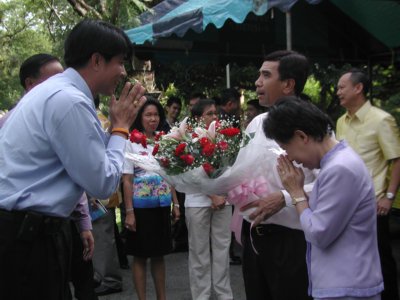 PHUKET CITY: About 70 people gathered in front of the Governor’s House on Narisorn Rd this morning to wish Udomsak Uswarangkura a fond farewell on his last day as Governor of Phuket.

Governor Udomsak, who today brought to a close some 38 years of government service, left his home at 8:45 am, bound for his native Bangkok.

Before departing, he received flowers and souvenirs from government officials, and offered them tea and coffee before saying, “Thank you, and good bye.”

Vice-Governor Worapot Ratthasima told the Gazette that he had yet to be informed of who will replace K. Udomsak as Governor.

“The Vice-Governors will continue as ‘acting-Governors’ until we hear from the new Cabinet,” he said.