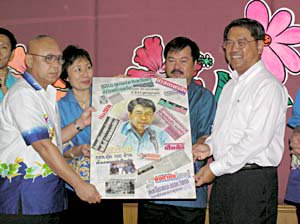 PHUKET TOWN: Outgoing Governor CEO Pongpayome Vasaputi began the traditional round of farewell functions last night at a farewell party with the media, at which he promoted competitions for singing children and “Good Phuket People.” While the governor was coy about the positive results of three years in the post that he relinquishes on October 1, he was keen to tell those at the The Metropole hotel about his latest provincial projects. A singing contest, involving groups each made up of five students aged 14-20, will be staged on September 29 with prizes of 10,000 baht, 7,500 baht, and 5,000 baht for songs that highlight the best qualities of Thai living. A second project, The Good People Prize, honors individuals on the island who have been exemplary community leaders for more than 15 years. Every year for the next three years, one man and one woman will be chosen and presented with honor pins and trophies as a mark of appreciation of their exceptional characteristics. The selection committee has chosen local historian Prasit Shinakarn and Khunying Kanjana Na Ranong this year. They will be honored on the night of the singing competition final at the Thainaan restaurant on September 29. K. Pongpayome modestly told reporters of the past three years, “If you asked me what makes me most proud, I really can’t tell you. I can’t remember.” He said the Ministry of Interior had presented him with a gold Garuda pin for his service as Governor CEO but his main concern now was to perform well in his next job as Director-General of the Department of Local Administration.

Dead pets thought to be work of poisoner