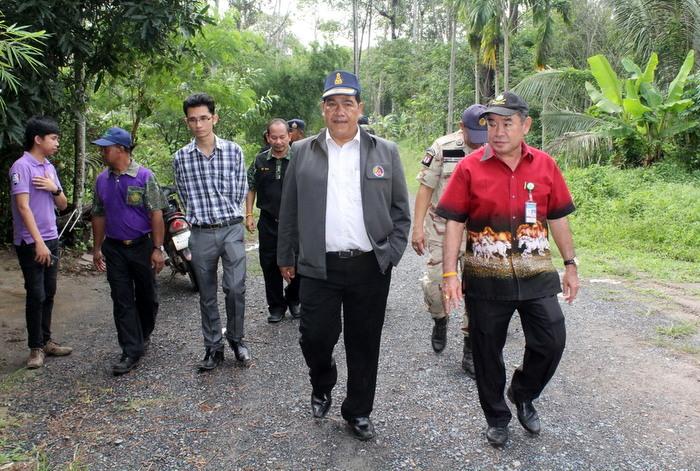 PHUKET: Locals are furious after government officers demolished plantations and houses in Thalang on Thursday.

“This is incredibly unfair,” said Sorasid Saksuay, a representative of the 200-member community, talking to the press yesterday. “We’ve been living here since before 1998.”

A Suan Pa Bang Kanun census in 1998 registered community members and property claims. The area, spread out over some 2,000 rai, is partially covered by a forest. Government officials said they allowed community members to settle on land where the forest had died off naturally, but villagers not counted in the census are accused of encroaching onto government-controlled land.

The demolitions, which claimed 5 houses, a palm-tree plantation and a rubber plantation, were carried out using two backhoes.

Vice Governor Chokdee Amornwat claimed that the structures and their inhabitants had encroached on more than 48 rai of forest reserves.

“The government decided to step in after locals filed a complaint,” V/Gov Chokdee told the Phuket Gazette on Thursday. “The case was taken to court, where it was ruled as encroachment, which led us to do the demolitions today.”

“And, the court is also considering whether another 100 rai or so has been encroached upon,” he added.

Boonsueb Samakraj, Director of Forest Management Bureau No.12, Krabi Province, said that the raid and consequent demolitions were the result of a directive by Prime Minister Prayut Chan-o-cha.

“There are four steps in the forest reclamation plan,” Mr Boonsueb said. “Within one year, we’ll stop deforestation and begin to get the forests back under government control. In a span of two years, we’ll be focusing on improving our forest management, and over the next decade we’ll be restoring national forests.”

“We hope to take back over 40 per cent of the country’s encroachments and restore them to their natural state,” Mr Boonsueb added.